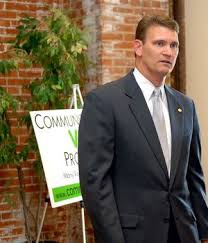 In testimony given by Wallace himself during a May 5 meeting with creditors in his Chapter 7 bankruptcy proceedings, he admitted under oath that "during calendar year 2014 from salary, commissions, conversions of loans, and other forms of borrowing and/or compensation, Wallace had received approximately $1 million."

The revelation, as well as other accusations against Wallace is included in a lawsuit filed Friday in U. S. Bankruptcy Court for the Southern Division of Texas by two creditors, Wayne M. English and James D. Colling.

The lawsuit asks the judge not to reward Wallace for debts incurred through "false pretenses, false representations or by means of actual fraud."

Among the items cited in the petition:

-Wallace-Bajjali received $1.68 million from the City of Joplin

The petition notes that Wallace failed to make even one payment to the investors, which brought a lawsuit from the court-appointed receiver for the BizRadio settlement.

It just shows that Wallace never intended to pay anyone. He had the grand scheme preplanned of going to bankruptcy court way before he even did it, and dust his hands clean. I do think he made a grave mistake in going to bankruptcy. Now the feds are going to dig deep into his fraud. I'm confident he will be indicted.

Its Hard Out Here For Pimp-Terrence Howard (Hustle & Flow)

In November of 2014 Investors were asking for their money, and Wallace would not give it to them. He instead was talking about taking the company public. I think now we know why it didn't happen. Investment bankers didn't like what they saw. They must of known that Wallace was enriching himself. We know that Wallace stopped paying Bajjali around July of last year. This means Wallace was pocketing all the monies he was receiving from loans, salary, commissions, fees, etc. If Bajjali doesn't want to go down with him, he better come clean. I'm sure he also enriched himself too before the fallout. But he may have a chance to escape prison.

WELL WELL WELL! Two of Wallace's partners/friends have been warned that if they don't provide the court with what the trustee is asking for, such as partnership documents, etc, the court is going to sanction them. J. Bohm is known to throw people in federal custody and issue substantial fines. Lets see what happens. I think the debtor, Wallace, should also be part of the sanctions since he started this mess.

.... The guy is Taseer Badar. He better start producing documents. This guy runs ZT Wealth. He and Wallace are old cronies. If you go to ZT Wealth this guy (horrible botox) has a photo with Wallace and others holding a big check payable to Alex Rodriguez the baseball player. What's odd, this guy also filed a suit against Wallace in February in Harris county.