Newton County Circuit Court records do not indicate Larry Edens, 50, Granby, has been arrested on two counts of child molestation and two counts of statutory sodomy, but his bond has already been reduced. 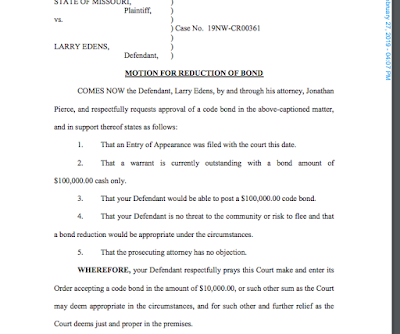 Judge Anna Christine Rhoades reduced the bond from $100,000 cash only to a $100,000 code bond, according to online court records.

The ruling came following a motion by Edens' attorney, Jonathan Pierce, Neosho, that asked for the reduction because "your defendant is no threat to the community or risk to flee and that a bond reduction would be appropriate under the circumstances."

Pierce noted that the prosecuting attorney had no objection to the bond reduction.


Judge Rhoades set the bond at the amount Pierce requested.

A warrant was issued for Edens' arrest February 22 following a Highway Patrol investigation into allegations that Edens molested a child beginning from the time she was eight or nine years old. The charge lists 1996 and 1998 dates.

The evidence came after the alleged victim, now an adult, took video and audio recordings of conversations in which Edens, a director of the Oil of Joy Ministry in Diamond, as well as being the husband of the church's minister, Shelly Edens, and a manager at the .Country Acres Mobile Home Park in Joplin, seemed to acknowledge his earlier crimes and also appeared to be unable to keep his hands off the woman, according to the probable cause statement.

The statement indicates the alleged victim made the recordings in September 2018 and then brought them to the Highway Patrol in October, at about the same time McDonald County Circuit Court Judge John LePage entered a full order of protection against Edens. 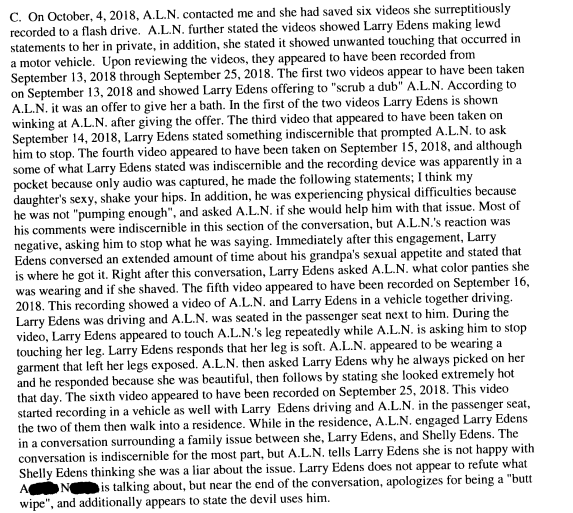