Cynthia Davis: Forget mass shootings, Satan is behind plot to take away our guns 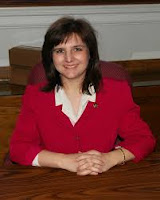 (Cynthia Davis is a former Republican state representative from O'Fallon and is host of an internet radio talk show.)

The news of the recent reckless murders force us to ask "What is causing this?" At the end of all the public debates, we still are left with a godless culture feeding a spirit of evil.

I condemn all the opportunists trying to use these tragedies to further their leftist agendas. Violence stems from the heart and cannot be controlled by more laws. If anything, these shootings prove that no government is capable of assuring nobody will ever get hurt by a deranged murderer.

It's hard to understand why so many people would be repeating the nonsense of the anti-gun activists. Of course, they want us to be disarmed. Armed citizens create more safety than disarmed citizens. If we were in a crime scene, we would be safer if more people were able to protect us.

Do not fall into the same mentality that allowed the Nazis to rise to power in Germany. When we give propagandists our time, we give them more affirmation for their distortions. Their goal is to use tragedies to manipulate the public into further eroding our Constitutional protections.

Have we become a nation of cowards? The proper focus needs to be training the public on how to respond properly. We need to think about protecting ourselves. If there were 3,000 people in Walmart, the bad guy should have been easily outnumbered by the good guys. If only 30 people had started throwing things at the shooter, cans, tools, balls, soda bottles, anything....he couldn't have continued. Where were the brave men who were willing to stop this?

Satan came to steal, kill, and destroy. The only defense is to reject the lies and promote civility. We must teach the next generation that there will be accountibility at the end of our lives. Justice will be completed by the Ultimate Judge of the universe. Until then, we must not allow people to infringe on our right to bear arms.
Posted by Randy at 8:46 AM

Cynthia is such a moron that her writing could pass for satire.

Cynthia, who claims to be a follower of Christ, says not one word in the honor and memory of innocent victims of a mass murder event, but instead calls them cowards for not chucking bottles and cans at the shooter. Randy, please reconsider providing a platform to her cruel and idiotic perspective.

Yep, they walk amongst us.

I’m thinking the main thing that led to Nazi Germany was a crazy narcissist able to convince the people to hate a targeted group.

There is definitely a war going on. It's spiritual warfare, good vs evil. Ephesians 6:12. The Bible also tells us in that last days there are those who will call good evil and evil good, exactly what is happening.
People can deny it all they want, but it won't stop Jesus Christ from returning. He will deliver judgement to every individual according to their works.
If you read the Bible, you know how the story ends. Regardless of the laws or what men have to say, God's Word is Final.

If she says she follows Christ, why not take her at her word?

What a self indulgent stupid gawd hustler this woman must be to
write such bullshit.

This woman proves she probably is one of those excreably deplorables!

And won't Cynthia be surprised to find out that Jesus thinks it was pretty terrible of her to call the El Paso shooting victims cowards. Man, the look on her face when she finds out she was wrong about everything...

There is another part of that equation. The part where he disarmed the citizens so that they were unable to fight back when they finally realized he had gone too far. Our rights (all of them) were God given, the only thing the government can do is take them away. I can't believe how many people just want to hand over their rights.It's especially infuriating that they want to take mine away.
To paraphrase someone really smart: Those who are willing to give up their freedoms for a little bit of safety, deserve neither.

Please Randy, enough is enough. Someone wants our guns....could it be SATAN????? I though I was reading The Onion.

Right, and Thor is due back from Asgard any day now.

Look folks, regular mass shootings are just the price we have to pay so rednecks can be ready for their imaginary war with the government.

Why would someone ever say such an insensitive thing? Blaming the victims and calling them cowards.

If every Hong Kong citizen took to the streets with an AR15 the government would simply deploy tanks and planes against them, just as would happen here. The idea that Bubba militias would ever stand a chance against the full force of the military is ridiculous.

If that were the case, then we wouldn't still be in Afghanistan fighting. They don't have tanks or airplanes, yet they are not defeated. The Japanese wouldn't invade the US during ww2 because their war minister said that it couldn't be done as there were too many guns in the hands of citizens. "There would be a gun behind every blade of grass" Guerilla warfare is a totally different animal.

I am taking her at her written words here. Do you think Christ would endorse calling these shooting victims cowards?

I'm pretty sure the opposition in Afghanistan has a bit more in their arsenal than what's available at Academy, and the Japanese War Minister might've liked his chances a bit more if he'd had Chinooks, mobile guided missile launchers, weaponized drones and satellite imaging at his disposal. Bubba's imaginary war with the gubmint will be his actual ass-whooping that will probably be over before anyone needs to change their socks.

A lot of these "bubbas and rednecks" that you like to condescend to are in the actual military How many of them do you think would actually fire on American citizens even if ordered to?
This is what happens when your news sources are late night comedians. Critical thinking doesn't include or require a laugh track.

I DON'T think the military is going to fire on American citizens. That's the scenario you suggested. You're the one justifying gun proliferation in this country with what's happening in Hong Kong possibly someday happening here, hence "imaginary war". You probably shouldn't bring up critical thinking until you get a grasp on basic thinking.

Basic thinking says Tha the vast majority of gun owners in this country don't shoot anyone. Why would we take away their the rights that they have because of some mental midgets that do crazy things?
I guarantee that war will not be imaginary if they try to take guns by force in this country.

Basic thinking says Tha the vast majority of drunken drivers in this country don't kill anyone. Why would we take away their the rights that they have because of some mental midgets that do crazy things?

What are you going on about?

4:28, you are so intelligent and respectful. You prove your points so well. Be proud of yourself.