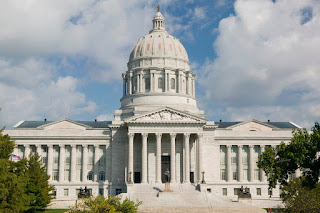 By Tessa Weinberg
Missouri Independent
When Missouri’s top leaders resisted implementing statewide restrictions, like a mask mandate, amid the pandemic, there was a theme they repeatedly raised as the basis for their decisions.

On Wednesday, a Missouri Senate committee debated a slew of bills filed by Republican lawmakers that aim to strip local authority from city and county officials and health boards during states of emergency.

Some bills would limit how often local public health orders and regulations can be implemented, including no more than a cumulative 30 days every 60 days or 14 days in a two-year period, unless approved by the legislature. Others would impose a 30-day comment period on such orders and require they be approved by local officials. Some would limit restrictions on the free exercise of religion.

Another would prohibit local officials and the governor from imposing limits on the number of people within residents’ homes. One bill would restrict county health boards’ authority to issue restrictions related to infectious diseases altogether.

“COVID-19 has taken thousands of lives and made many more sick. At the same time, I don’t think it’s an exaggeration to say that COVID-19 has been the most politicized disease in human history,” Sen. Bob Onder, a Republican from Lake St. Louis and chairman of the Senate Committee on Health and Pensions, said during Wednesday’s hearing.

Onder recounted the effects the pandemic has had — shuttering businesses, lost jobs, the impact on education gains and higher rates of suicide and depression.

“Many have questioned, is the cure worse than the disease?” Onder said.

Supporters of the legislation, including small business owners and county commissioners, said the bills will ensure accountability, consistency and oversight is baked into the process for how restrictions are issued.

Meanwhile, opponents of the bills warned of unintended consequences that may result during future emergencies if the ability to issue public health orders in a timely manner is severely limited.

One provision of Senate Bill 21, sponsored by Sen. Andrew Koenig, R-Manchester, would limit political subdivisions, county health boards and the Department of Health and Senior Services from issuing ordinances and regulations during a declared state of emergency to a total of 14 days in a two-year period.

Under the bill, public health orders that go beyond that allotted period would require approval from the both chambers of the Missouri General Assembly through a concurrent resolution.

Sen. Bill White, R-Joplin, raised concerns that with the Missouri legislature only in session from January through May, it would require a special session at the cost of taxpayers to address additional restrictions that fell outside of that window.

“Let’s look at how we can constrain without throwing the entire ability to have emergency response out,” White said.

Clay Goddard, the director of the Springfield-Greene County Health Department, warned that limiting health departments’ powers to implement rules or impose quarantines could have potentially deadly consequences outside of a pandemic, such as during a measles outbreak.

“And really, those are situations oftentimes where inaction can result in death,” Goddard said. “And I’m not being a drama queen, but that can occur.”

For some lawmakers, the basis of their bills stemmed from what they viewed as “extreme” and “far-reaching” orders issued by certain county officials. Throughout the hearing, there was a focus on public health orders issued in St. Louis County, including a November order that temporarily closed indoor dining in bars and restaurants.

Benjamin Brown, the owner of Satchmo’s Bar & Grill in Chesterfield, whose restaurant was shut down for violating county health orders and is among those who had sued the county to invalidate the orders, said he’s had to cut his staff in half and make difficult decisions as to who will continue to receive a paycheck versus who will be laid off.

Chris Saracino, who helps run the Bartolino’s family of restaurants in St. Louis County which also faced shutdowns, said that from November through the end of December, business was down by 66 percent.

“We still wrote the check for the property tax. We still paid the payroll tax,” Saracino said. “And we’re left with absolutely no data to support what was done to us.”

Koenig’s bill would also allow residents to receive a credit on property taxes if their property was affected by city-wide or county-wide restrictions.
‘Powerplay’

Local public health directors on the frontlines of the pandemic expressed dismay in what they described as lawmakers’ “powerplay.”

After Ripley County’s last hospital closed its doors two years ago, Jan Morrow and her small staff at the Ripley County Public Health Center have had to do it all. Working seven days a week since early March, they’ve had to contact trace and test and prepare mass vaccination events at the local high school gym — all on top of their regular public health duties.

Whenever a local ordinance is issued, Morrow, the health center’s director, said she always works together with her county commissioners and the elected health center board to ensure residents’ interests are best served.

“That’s the biggest mistake that they can do,” Morrow said Tuesday of state lawmakers’ bills to restrict public health’s authority to issue restrictions, later adding: “Everybody wants rules and regulations for everybody else, but themselves. And I think that’s what has happened.”

Morrow would like to see lawmakers put their efforts toward improving funding for public health.

From 2017 to 2019, Missouri ranked last in the nation in terms of per capita state funding for public health, according to an analysis from the State Health Access Data Assistance Center located at the University of Minnesota. Amid the pandemic, some local public health departments struggled to receive federal CARES Act funds allocated to their counties.

“It’s very hard to see if prevention is working until something like this happens,” Morrow said.

At the heart of the debate was what authority public health officials have when it comes to making decisions for the broader community.

John Truesdell, the presiding commissioner of the Randolph County Commission, said that public health officials’ focus is where it needs to be — on healthcare. However Truesdell, who was in support of the bills, said that their perspectives lead to “tunnel vision,” and that county commissioners are tasked with seeing the broader picture, including economic impact.

It remains to be seen how the proposed bills may clash with Gov. Mike Parson’s stance on local control. When asked about the bills during a press conference Wednesday, Parson said there were instances within the healthcare system where “probably people didn’t do as good of a job as they should have” at a local level. He said he would not comment on specifics until a bill is finalized.

“We all went through a pandemic that none of us have ever seen before,” Parson said. “To go back and reevaluate all aspects of how we handle it is a good thing.”

During a press conference in late November, he reiterated his support for local control while declaring he would not be issuing a statewide mask mandate.

“What we did in this state is that I do truly believe in local control and will continue to support the decisions that they make,” Parson said.
Science skeptics

Eleven months into the pandemic, lawmakers expressed skepticism around the science behind the virus’ spread and restrictions intended to limit it over the course of the three-and-a-half hour hearing Wednesday.

“To say, ‘if you were within six feet’ — who came up with that?’ said Sen. Cindy O’Laughlin, a Republican from Shelbina and sponsor of the bill that would strip county health boards of their authority to issue restrictions. “What are the criteria you use when you shut down your local economy?”

Sen. Barbra Washington, D-Kansas City, said she herself fought COVID. As lawmakers debated the extent of restrictions and its impact on religious freedom or the economy, Washington said the virus’ toll on people’s health can’t be ignored.

“I don’t have a problem with people, especially small businesses, being open,” Washington said. “But I do have a problem that we’re ignoring the fact that this is something that as of today has killed 400,000 people in less than a year.”

Tessa Weinberg covers education, health care and the legislature. She previously covered the Missouri statehouse for The Kansas City Star and The Columbia Missourian, where her reporting into social media use by the governor prompted an investigation by the Attorney General’s office. She most recently covered state government in Texas for The Fort Worth Star-Telegram.
Posted by Randy at 9:09 PM

OK, last in country in health care spending, strip counties of control over their area and stop the social distancing guideline. Can anyone see the total ignorance of our legislature and how inept they are at modern governance. Just like their favored orange haired leader they take their orders from big business and far right news media with a different agenda than protection of the citizens.

Conservatives love to crow over "states' rights," but aren't so keen on "county rights" or "city rights." They want to keep as much power as possible in Jefferson City.

Rednecks gonna redneck. If it was Trump that issued the mandate, these republican scum would be goosestepping right in line. These ignorant, anti-science hicks really don't get it. Soon, they will. These are the same illiterate fools that will be the first in line at the hospitals crying for care.