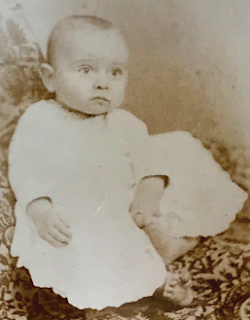 (Today marks the 137th birthday of Harry S. Truman, the only president born in Missouri. Truman was born in a small house in Lamar, a story that is told in my book The Buck Starts Here: Harry S. Truman and the City of Lamar. The book also details Lamar history, including the rise to prominence of the city's leading newspaper, the Lamar Democrat, beginning with its first editor Lee Chiswell.)

As Lee Chiswell put his stamp on his newspaper, he entertained readers with a combination of political news, heavily favoring the Democratic Party, of course, and his whimsical musings on community news, describing somewhat personal events in detail.

In early May 1884, Chiswell wrote about a visitor to Lamar.

“Bill Moody is in town. It seems that he was asked to leave Appleton City and remain away 12 months. He married an overconfiding girl and then mistreated her.

“The girl’s father clubbed him and finally shot at him. He was arrested and fined five dollars for not hitting him.”

Chiswell reported on a “baby cyclone” that put a scare into Lamar residents May 7, 1884, but by the following day, the skies were clear and it was another typical day for the city.

That day’s Lamar Democrat shows J. A. Albright advertising the “most complete stock of boots in southwest Missouri.”

J. M. Fisher paid for “Prince, the Roadster Stallion, a beautiful bay with black points, six years old, 16 hands high and weighs 1,200 pounds of fine style and good action and is among the best bred stallions in the southwest.”

The Palace Barber Shop and Bath Room promised “shaving, hair cutting and shampooing with ease and celerity” and promised satisfaction “or no charge.”

Byrd’s Ice Cream Parlor sought a different clientele, claiming to be “neat, clean and cozy,” newly remodeled and claimed “it is the place to bring your girl.”

***
Available in paperback and e-book

In that day’s newspaper, John Truman placed another advertisement.

One thing that was not mentioned in the May 8, 1884 Lamar Democrat was another event that took place in Lamar that day. Births were not considered news at the Democrat even when the father was an advertiser.

Dr. William L. Griffin, who sported a distinguished thatch of white hair with a long, flowing beard to match, had established a successful practice in an office three blocks northeast of the square.

Griffin was a “physician, surgeon and obstetrician who paid special attention to chronic diseases and was an avid amateur historian.

Griffin was also $15 richer May 8, 1884, when he rode what he claimed to be “the fastest horse in Barton County” to the Truman home and delivered a baby for John and Martha in a downstairs room measuring six feet, six inches by 10 feet, nine inches.

Two days later, Martha Truman recalled years later, a Baptist circuit rider, Washington Pease, stopped by the Truman home, held tiny Harry aloft with the sun shining on the child and proclaimed what a sturdy baby he was.

On June 5, 1884, Griffin recorded on the birth certificate that a son was born May 8 along with the name and age of John and Martha Truman and John’s occupation. The baby’s name was not recorded for nearly six decades.

After his son was born, John Truman commemorated the occasion by planting a pine tree beside their home and legend has it nailed a mule shoe above the door for good luck.

After debating what to call their son, John and Mattie elected to call him Harry after his uncle Harrison Young and gave him the middle initial “S” in honor of his grandfathers Solomon Young and Anderson Shippe Truman.

Harry S. Truman spent the first 10 months of his life in Lamar, leaving the community too young to have any memories of it, only stories that were told to him by his parents.

With the mule business failing, John, Martha, and their infant son said goodbye to Lamar in March 1885, selling the home and the barn for $1,600 and moved to Harrisonville, Missouri.


It would be another 39 years before Harry Truman returned to the city where he was born.
Posted by Randy at 4:36 PM