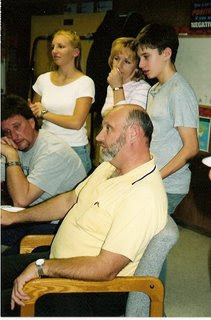 A grand jury indicted Lambert in February, after dismissing the charges against him in November 2007. Charges had been dismissed earlier against Lambert's wife, Patty, her brothers (and Lambert's stepbrothers) Paul and Tom Epling, and Tom Epling's wife Laura.

Today's decision marks the second time Ms. Durbin has given reluctance of witnesses as the reason for dropping charges. After the first time, the lawyer for the witnesses indicated that was not the case.

A more thorough report on Lambert was provided by National Public Radio and was cited in the Dec. 16, 2006, Turner Report.
Posted by Randy at 4:13 PM

I'm beginning to wonder if Janice Durbin can prosecute a jaywalking case down there in McDonald County. What a miscarriage of justice. Maybe the deputies need to catch them in the act next time, take photos, shoot video and put it on YouTube, have the whole thing notarized, get a signed confession, and then obtain a guilty plea in a court of law. Perhaps then, they'll have a conviction down there. What a shame.