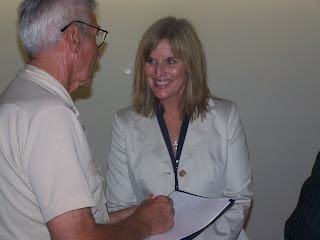 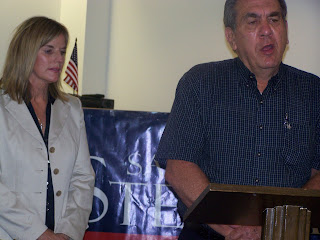 Since much of the Republican political establishment has been either openly or surreptitiously backing Kenny Hulshof for governor, State Treasurer Sarah Steelman has emphasized the support of ordinary, every day citizens for her candidacy.

The support of three more ordinary citizens was announced today at the Joplin Public Library...with a total of nine people in the meeting room, including Mrs. Steelman, the three who were endorsing her, two of her campaign workers, a reporter from KSN, and me. I didn't ask who the other guy was, but he appeared to be a reporter.

I am not sure if the low turnout was an indictment of the Steelman advance team or of our local media. .

The endorsements came from Don Stubblefield, Carthage, a former teacher at Joplin Parkwood High School and my alma mater East Newton High School, Bill Early, Mount Vernon, a retired law enforcement officer and Vietnam veteran; and one of my former students at Diamond Middle School, Ben Taylor, 18, who will be attending Central Missouri State University in Warrensburg this fall.

Good for the local media for not showing up to a staged event. Of course, perhaps the reason they weren't there was because they were at Blunt's staged event at MSSU.

It seems as though the steelman/hulshof thing is getting pretty intense. Hulshof picked up another endorsement last week from The Relevant Elephant, and it's generating some controversy. http://www.therelevantelephant.com/blog/entry/endorsement_for_missouris_governor

Sarah,if you are really wanting to save money spent on gas.Maybethe 3 people could ofphoned intheir support. Really....just step aside and take a lesson from Hilary and stand behind your party. GO KENNY!