'Phone Sex Grandma' and 'Son of a Stripper' file for U. S. House seats 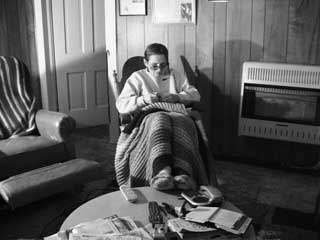 A "Phone Sex Grandma" and the "Son of a Stripper" filed today to run for two U. S. House seats.
Opal Dockery, Lamar, star (and only cast member) of the nine-minute movie, "Phone Sex Grandma," has filed on the Democratic ticket to oppose incumbent Rep. Sam Graves in the Fourth District, while her son, Jack Truman (formerly Jack Kerney, but if you're from Lamar Truman has to sound attractive), director of "Phone Sex Grandma" and star and director of the upcoming film "Son of a Stripper," filed today on the Democratic ticket to make his second effort to unseat incumbent Seventh District Congressman Roy Blunt.
"Phone Sex Grandma" was featured recently at the Slamdance Film Festival in Los Angeles. According to the festival website, it was produced by Truman and Ms. Dockery, written by Ms. Dockery, edited by Truman, scored by Truman (to prevent any misunderstandings, that means he wrote the music) and stars Ms. Dockery. The film's description says it is about a "60-something grandma working a phone sex line in a small Southern ghost town."
According to one online critic, the movie featured "nine minutes of an older, homely looking woman (Opal Dockery) sitting around performing sex calls for work to various callers while she goes about her chores." According to the critic, the film includes a scene in which Ms. Dockery tells a caller about her vagina while reading "The Origin of Species" by Charles Darwin.
"Son of a Stripper" apparently will be an autobiographical story, according to an article in the Feb. 3 St. Louis Post-Dispatch, in which Ms. Dockery said she had worked more than 20 years as a stripper. "And she did it while raising a son, who just happens to be the filmmaker, Jack Truman," the article said. 'They are now trying to develop a feature film based on their life together, called "Son of a Stripper.' "
Ms. Dockery has already immortalized her earlier career in her book, "Thoughts of a Stripper: A Mother's Story," which details her career as "Melissa St. John: The Upside-Down Girl." The book is described this way on the Dixie Publishing website:
"Thoughts of a Stripper: A Mother's Story, by Opal Dockery, is an inspirational, spiritual and autobiographical journal of a burlesque dancer traveling across the country in the 1970's. In the 1970's, the Burlesque industry was thriving. Nudity and pornography was a public and political outrage. And people across the country were flocking to burlesque theaters to see Melissa St. John: The Upside Down Girl. Little did they know she was a single Mother, alone, on the road, with her two children in boarding schools in separate states. Over a 6 year period while traveling on a burlesque circuit across the country, she was searching for a way to come face to face with her true spirit. Through writing her innermost thoughts on paper, she found herself in the most unconventional way."
The site describes Ms. Dockery as a "writer, counselor and speaker, a vegetarian, and says she has a bachelor's degree in psychology and a master's degree in criminal justice. She is a founding member of the Universal Equalitarian Church, the website says.
***
Truman is one of three Democrats who have filed for the Seventh District seat. Also filing today was Charles Christup of St. Fair, who is making his second run. Filing earlier was Ron Lapham, Bolivar, who is running for a fourth time.
Posted by Randy at 7:51 PM

Thanks for the research on this Randy. Not sure if Jack will be marketable in SWMO. Looking forward to hearing more about each of them, working on a project for that purpose myself...

When Jack Truman went to high school in Lamar he was known then as John Kerney, not Jack. Class of 1983 I believe.

The boy needs to get a real job and learn how to actually work for a living instead of sponging off his mother.

I want to let everyone on Blog that I am dropping out of the election for U.S. Congress for the 6th District. I have discovered that it will take more time and money that I can afford. Thank you, Opal Dockery