Hartzler: We must protect our national security from reckless liberals 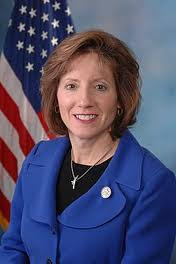 In her weekly newsletter, Fourth District Congresswoman Vicky Hartzler lays the blame for the failure of the super committee squarely at the feet of Democrats who refused to compromise and would not even consider any of the plans offered by the Republicans.

The Joint Select Committee on Deficit Reduction, better known as the Super Committee, failed to reach agreement on $1.2 trillion in spending cuts. An opportunity to eliminate some of our huge debt was wasted – and with it, the chance to spur economic growth and create much-needed jobs. To add insult to injury, the failure to reach agreement triggered a mechanism that will lead to an additional $600 billion in cuts to our national defense, making total cuts of more than $1.065 trillion in defense spending over the next ten years. I find this unacceptable.

It was clear, early on, that this committee would have a difficult time producing a positive result. Hopes for success were dealt a serious setback when President Obama and Washington Democrats pushed for huge tax increases on America’s job creators. The President then insisted that $450 billion of his failed stimulus policies be included in any agreement. Sadly, these “Inside the Beltway” Democrats put their tax and spend dogma ahead of the interests of the American people and failed them miserably.

We now know that Republicans made multiple offers, including a proposal to consider new revenues achieved by making the tax code fairer, simpler, and more competitive. Super Committee Democrats never seriously considered any of these proposals and never put forward any serious plan to slow the unsustainable growth of the big drivers of our national debt, which include our nation’s health care costs. The debt has topped $15 trillion, with the amount owed by every man, woman, and child in America nearing $48,000. There is no time to lose. We must get serious about dealing with this debt crisis.

President Obama, who was globetrotting in Australia and Indonesia and was AWOL during the critical stage of the discussions, is now vowing to veto any effort on the part of Congress to head off cuts to America’s security and its national defense. This position flies in the face of the views expressed by his own Defense Secretary, Leon Panetta, who has warned that further cuts could “tear a seam” in our national defense. Panetta, who insists our troops and our nation deserve better, also cautions that further defense cuts could leave this country open to attack from those who are emboldened by the scaling back of defense spending. President Obama’s embrace of a strategy of taking money from our national defense to allow for continued out-of-control spending on social programs is one reason I opposed the debt ceiling agreement when I voted against it in August.

I will be working hard to see that these cuts do not take place and have already begun the process to reverse their draconian impact. Immediately after the announcement by the Super Committee, I participated in a conference call with other members of the House Armed Services Committee. We discussed possible strategies to protect America’s national defense against these ill-conceived cuts. Upon our return, we will be meeting again and plan to move quickly. Our national security must be put ahead of the reckless spending favored by liberals. That’s our duty. That’s our job. Let us hope the nation’s Commander in Chief agrees and reverses his threat to veto any legislation which would reverse the cuts to our national defense. I believe, according to the Constitution, it is his duty and job, too. We shall see.

On a more pleasant note, America pauses from the hustle and bustle of our busy lives to celebrate Thanksgiving and to join friends and family as we thank our Creator for the blessings we enjoy. Many of us learned, as children, how the Pilgrims gave thanks to God following the harvest of 1621. It is in that spirit that we give the Almighty thanks today. Despite our many challenges as a nation, America is still the greatest country in the world and we are truly blessed to live here; enjoy its beauty; benefit from its opportunities; and be blessed by its freedoms. As we gather together this Thanksgiving Day, let us continue to give thanks to God for all He has given us. Let us also thank the brave men and women of the U.S. Armed Forces whose sacrifices protect our freedoms and allow us to enjoy God's bounty. We truly do have many reasons to be thankful this day.

Have a blessed Thanksgiving!
Posted by Randy at 9:40 AM

We have had these tax breaks for the wealthy since GW, where are these jobs. Hartzler says if we increase their taxes they won't be able to increase jobs....well I must have missed something. They sure haven't created jobs so far??