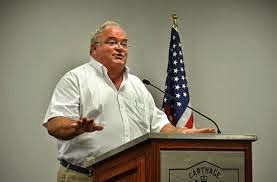 Billy Long has not found the time to schedule a town hall meeting in the more than three years since he became Seventh District Congressman, but thanks to his campaign contributors he has been able to spend plenty of time in Las Vegas and Florida and spend nearly $19,000 for meals during the first three months of 2014.

One of Long's Las Vegas trips was well publicized as the congressman, a friend of Las Vegas casino owner and heavy-hitting GOP money man Sheldon Adelson, had the privilege of introducing former Vice President Dick Cheney Friday, March 28, during a cattle call for potential presidential candidates seeking Adelson's support. The event was held at Adelson's Venitian Hotel and Casino.

Whether Long had any other political business during the Vegas trips is not clear, but he reports paying $283.50 for a meal at the Southwest Steakhouse in Vegas on January 9, a $24.17 meal at the same establishment February 11 and an $819.05 stay at the Mandalay Bay Resort Hotel and Casino in Vegas which was listed for February 12.

It appears, though it was not mentioned in the disclosure report, that Long was at the hotel for the Safari Club International Hunters' Convention, which was held February 5-8, with Long and several of his colleagues attending.

Though Long's appearance at the Adelson event was on March 28, he is listed as spending $345.28 for "hotel-travel" at the Venitian on March 31.

Not all of the congressman's trips were out west. He spent a considerable time in Florida, according to the disclosure report, with stops in Naples, Sarasota, and Tampa, between February 18 and February 21.

The meals included the following:

When he first ran for Congress in 2010, Billy Long's slogan was that he was "fed up." It appears that three years in Washington may have left Billy Long overfed up.

I am fed up with Mr Long

And to think my family has a budget of $600 per month for groceries. We only get steak in the summer when the garden is producing and we don't have to spend as much on produce.

its hard for us little people to understand the sacrifices that our elected officials make on our behalf.

Now leave me alone while I enjoy my great value macaroni and cheese dinner. Its all I can afford after paying my taxes.

It's pretty obvious he hasn't missed any meals.

Looks a lot like Boss Hog from Dukes of Hazzard.

If you run for office on the platform of being fed up with the corruption of the Washington Establishment- apparently you have to join them to figure out how to stop them- or- never mind- just strap on the feed bag.

"When he first ran for Congress in 2010, Billy Long's slogan was that he was "fed up." It appears that three years in Washington may have left Billy Long overfed"

He likes the night life baby!

Some pigs are more equal than others.

All this was so predictable. In the December 2009 Billy talks about how the real estate bubble was cramping his style. So taking advantage of taxpayers living like Washington royalty along side Nancy Pelosi was a given for Congressman Long.

Billy's eatin' is about $5,000 more than the average annual income of the workers who were serving him.

This guy is everything I hate about politicians. From having no ideas of his own to voting a strict tea-party line. Fifty votes to repeal Obamacare. You would think after the 3rd vote he would have said I'm not doing this anymore. That's not why I'm here. He voted to shut down the government TWICE!!

This guy is everything I hate about politicians. From having no ideas of his own to voting a strict tea-party line. Fifty votes to repeal Obamacare. You would think after the 3rd vote he would have said I'm not doing this anymore. That's not why I'm here. He voted to shut down the government TWICE!!

Hey.. instead of complaining, how about we all do something. Like vote? And actually do some research on the guy you guys for.

Man's so big he can't even clean his own butt...Tony

People as a whole leave politicians unchecked until election time is around the corner. We as a nation are distracted. Do away with high school sports for a year, there would be would be an uprising that this country has never seen before. I am ashamed of Americans at the lack of interest that they take in our political system. Don't cry when they screw up, you haven't been watching them.

Why cant this be put on a billboard during election time??

Billy Long is not a real politician. He is a fat cat living the life!! His opponent cant even afford a good ad campaign!! Get this sucker (literally ) out of office. His expenditures are about to break us here in tne 7th.

Well, it is still true; "We have the best politicians money can buy" Mark Twain. But this is the first time a politician has picked up the check for dinner. I think your report would be better is you would go into this a little deeper. A $200-$300 dinner check in DC is mostly likely party of 2, DC prices are much higher that SW-MO. And what was the attendance at Highland events? Mr. Turner keep going, you are on the right track! RB Grisham TX

There are even "Republicans" who can't stand him, but they'd rather vote him then anyone else (like a democrat.) Alas, its too late to turn back the clock. He's been elected twice, and now will get his extraordinary pension/health care that the majority of Americans can only dream about!