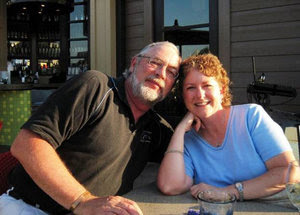 (The following obituary is taken from the Parker Mortuary website.)

Glenn and Lorie Holland of Joplin, Missouri, exchanged their earthly home for a better one on the evening of May 22, 2011, having just returned from a week at Walt Disney World in Florida in celebration of their 15th wedding anniversary.

Lorie Marie Holland was born December 22, 1962, in Joplin. She graduated from Parkwood High School in 1981 and attended Southern Illinois University in Carbondale where she was a member of the Sigma Kappa Sorority. She was a drafter for several companies in St. Louis and Joplin, having most recently worked at Allgeier and Martin. She loved scrapbooking, was an avid Disney enthusiast, a seasonal worker at OCC, and election poll worker. She was training for the Boomtown Days half marathon. She was a member of First Presbyterian Church growing up and a member of the Mayflower Society.

Lorie and Glenn were married on May 18, 1996, and were members of Central City Christian Church.

Glenn was preceded in death by his daughter Amy, grandparents Perry and Ruth Holland, and Wesley and Velma Tracy, and is survived by daughters Shannon Mills of Cibolo, Texas, and Rachel Alexander of Bryan, Texas, and grandchildren Ethan, Avery, Ryan, Taylor, Kyle. Glenn is also survived by his parents, Wayne and Mary Holland of Joplin, sister Dorothy Vaughan of Joplin, sister and brother-in-law Jenny and Rick Smith of Webb City, and numerous nephews and nieces.

Lorie was preceded in death by her grandparents, Paul and Edna Marti, and Dennis and Lois Lippoldt. Lorie is survived by her mother and stepfather, Bonnie and William Mahood of Overland Park, Kansas, sister and brother-in-law, Kristie and Steve Tusinger of Joplin, niece and nephew, Abby Marie Tusinger and Zachary Tusinger of Joplin, father Victor Lippoldt of Joplin, stepbrother and wife, William and Michele Mahood of Overland Park, KS, and their children, Kristen and Kellen Mahood.

Their joint funeral is to be held on Saturday, June 4, 2:00 p.m. at Ozark Christian College chapel. Visitation to be held prior to service beginning at 1:00 p.m. Burial will immediately follow services at Osborne Cemetery, 33rd and McClelland Blvd with full military honors for Glenn. Pallbearers will be nephews Zachary Tusinger, Nathan Smith, Jonathan Smith, Matthew Smith, Curt Vaughan, and friend of the couple, Rocky Swearingen. Funeral arrangements are under the direction of Parker Mortuary. A memorial service is to be held in their honor at Epcot on June 3. Memorial contributions may be made to the Joplin Humane Society, Ozark Christian College, or charity of your choice.
Posted by Randy at 10:04 PM