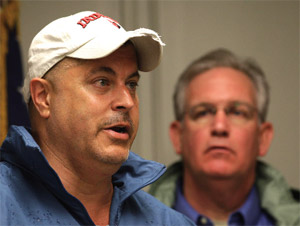 The Piqua Daily Call, the hometown newspaper of the Ohio city where Mark Rohr served as city manager before leaving to take the same position in Joplin, features Rohr in a story published today:

Former Piqua Commissioner and mayor Dave Martin, who was one of the commissioners who hired Rohr, said the former city manager is safe, as is his family, and the destruction spared his home.


Martin said he has not been able to contact Rohr, but spoke with his wife, Lois.

"My biggest feeling is relief that he and his family are OK," said Martin, who was in Chicago on Monday on business. "I know Mark and if anybody can help get them through this, Mark Rohr especially can do it. If anyone can focus and get this taken care of, Mark is the guy for that."

Martin, who received reports from Rohr's wife Monday morning, said Rohr was in a helicopter surveying the damage to the city he has managed since leaving Piqua in 2004. Rohr is helping to coordinate relief efforts.

Rohr was hired by Piqua City Commission in 1998 and he left in October 2004 to assume the responsibilities of Joplin city manager. Past city leaders credit Rohr with leaving Piqua a better place during his six-year tenure with the city.