Billy Long on State of the Union: We will not rubberstamp the Obama agenda 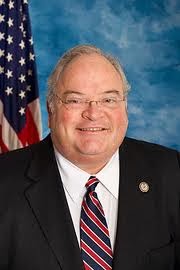 U.S. Rep. Billy Long issued the following statement on the president’s State of the Union address:

“The president and his administration like to say he has a pen and phone and is ready to act, but as a former constitutional law professor the president should understand there are three equal branches of government.

If his proposals are worthwhile and will help the American people then he should be able to get Congress onboard. My colleagues and I will not rubberstamp an agenda that increases the reach of the government into our lives, increases spending and decreases liberty.

We need a smaller, leaner government to help unleash the pent up economic growth that is vital to creating the jobs we need here at home.”
Posted by Randy at 8:46 PM

Looks all fed up.

As the POTUS was entering the chambers last night, Representative Long shook his hand and said, words to this effect: "Don't forget about Joplin."

So much for smaller government, eh Billy?

Sorry, but his mission is to divide the people. Makes Missourians look bad to have this type of politician in Washington, embarrassed by him.

Need to cut back on intrusive government like tornado drills right Billy?

The fastest way to a smaller and leaner Government is to do away with the House of Representatives.