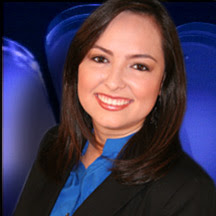 KSN reporter Iris Hermosillo, who has made quite a mark at the station since she arrived in June 2007, will leavw after next weekend. Miss Hermosillo has been hired as weekend morning meteorologist at KCTV5 in Kansas City. One of KCTV's weekend anchors is former KODE anchor Amy Anderson.

Miss Hermosillo has done weekend weather and has been a general assignment reporter during the week. This was her first broadcasting job after graduating from the Walter Cronkite School of Journalism and Mass Communications at Arizona State University.
Posted by Randy at 4:46 AM

Wow that is quite a step up. I am not for sure that she will mesh with the other KCTV mets, but best of luck to Iris still.

It is a big leap. I think she will be just fine!