NY Times: For Joplin, a love letter in ruins 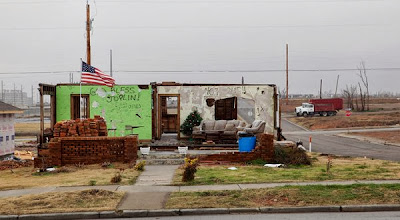 Joplin officials have to decide the fate of a tornado-ravaged structure that has become a symbol of hope for this community, according to an article in today's New York Times:

The building, a modest red brick house, has no roof. All but one of its exterior walls are missing, splintered and scattered by the storm, leaving an impression of a giant dollhouse. A Christmas tree, dressed in ornaments, has been placed in a tidy living room arrangement of two couches and a coffee table.


The reason this house has so far survived the wrecking ball can be found scribbled on its walls, on its floorboards, in its closets and along virtually every other remaining surface. They are personal messages, thousands of them, handwritten by the volunteers who flooded the community to help sift through and cart out the debris. Every day visitors and locals alike stop to add a note to the collection.

Every disaster has its memorials, from the organic to the carefully orchestrated. Several monuments have emerged here as the city labors to clear the remaining rubble of the tornado that cut through the heart of the community on May 22, killing 161 people. But as that effort nears completion, the community is questioning what to do with a memorial that is itself rubble.

City leaders have been discussing whether to move the whole structure or perhaps simply take parts of the building for public display. “We think there is some value to preserving it,” said Mark Rohr, the city manager. “But we can’t let it sit there forever.”