"Stop and get off me," the girl shouted, as Bobby Don Bourne had followed her into the bedroom to continue an argument.

The girl's mother rushed to the room and was frightened by what she saw. Bourne, a man in his 30s, was hitting her daughter, who was lying on her back on the bed.

Shawnee Bench yelled at Bourne, her brother-in-law to get off the girl. When he did not, she tried to grab his arm and pull him off, but he was too strong. Bourne grabbed her by the shoulders and gave her a violent shove.

In her probable cause statement filed that day in October 2012, there was no doubt in Officer Ruth Cottingham's mind what should happen to Bobby Dale Bourne. She wrote, "I believe the defendant poses a danger to the community or to any other person."


It was Bourne's lengthy past record, including arrests for domestic assault, unlawful use of a weapon, tampering, and driving while intoxicated.

But it was also the savage nature of the incidents involved in that October arrest that caused Officer Cottingham's certainty. Bobby Dale Bourne posed a threat to the community.

Yet less than a year later, Bourne sits in the Barton County Jail with a bond of $1 million, charged with kidnapping 12-year-old Adriaunna Horton of Golden City, charges which will likely be upgraded following the discovery of the child's body Wednesday.

The assault on the Lockwood child occurred only a month after Bourne had admitted in Polk County Circuit Court that he had violated his probation on a 2006 felony tampering charge by assaulting a law enforcement officer and being intoxicated.
Though a motion to revoke Bourne's probation and send him to prison for five years was filed, no hearing was ever held. Polk County records show that during an October 1 hearing, Judge John Sims ruled that Bourne's probation would be continued with the same conditions.
Before the month was out, court records indicate, Bourne had violated his probation two more times. Though there is no mention in the Polk County online records of what the violations were, but it would appear that at least one of the violations occurred just one week after Judge Sims' decision when Bourne was charged with two counts of domestic assault.

The charges that Officer Cottingham filed against Bourne in Lockwood included one felony assault, one misdemeanor assault, and endangering the welfare of a child.
On Nov. 5, a warrant was issued for Bourne's arrest and his bond was set at $60,000. Three times revocation hearings were scheduled and three times they were postponed. In the middle of that time, Judge Sims retired, throwing another monkey wrench into the works.
The motion to revoke Bourne's probation was withdrawn and on Feb. 8, the $60,000 bond was posted. His probation ended March 4.
Shortly after that, the assault charges against Bourne were reduced from felony to misdemeanor; he pleaded guilty and was sentenced to 60 days in jail on each count with the sentences to run concurrently.
Missouri Department of Corrections records show Bourne is on probation for the domestic assault charges, as well as assault on a law enforcement officer and resisting arrest.

Despite the history of violence, including violence against children, the judicial system appears to have continued letting Bourne slip through the cracks time after time.

If law enforcement officers investigating the kidnapping and death of Adriaunna Horton are correct, that judicial malpractice cost the 12-year-old her life. 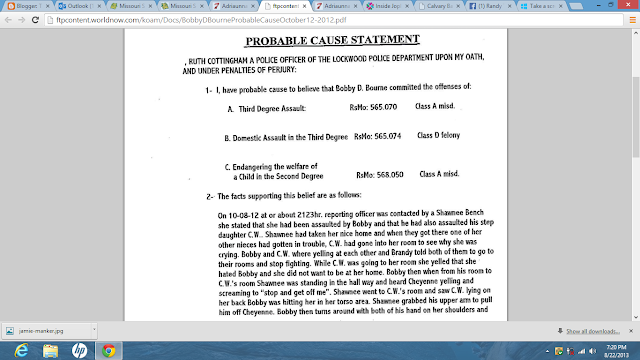 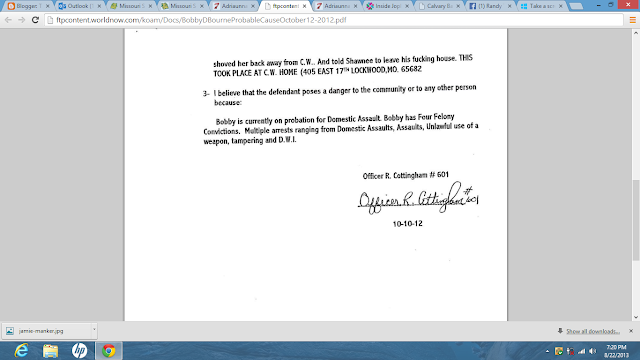 this man has all these previous charges against him, and has gotten away with it because the court system didnt do their job, and now the life of a little girl and the mourning that this family will never get over is because of it. it will never bring her back but the family of that little girl should file a lawsuit against the county. this is just plain sick! the police, and justice system is to be there to protect us not keep letting sick thugs keep getting away with this crap.

It seems to me that first time offenders get a harsher sentence than repeat offenders. If the judicial system would have done their jobs correctly she would still be here! Thanks judicial system! You messed up several times before. Now that this is in your face maybe you'll do something about it correctly this time~ a friend to the Horton family

And once again the court system has failed.
Thank you for your research. The nightmare that is this situation will never end for all the families that have been violated over the years by this man.

The family needs and deserves anything they can get from the system, I agree to sue the system; however we the taxpayers are the ones paying that bill.it doesn't hurt the system when we sue them because it isn't costing them anything; just us. We really need a system that works against the criminals and not us. A system that costs the judicial entities that are making decisions that more times than not return results unfavorable to us.He is a monster and I hope our system makes him pay. But in the end as usual. the family will sue and the system will pay and our taxes eat us up. no win situation.

Dont set him free whatever you do!!!

@David...LET HIM OUT!!! This is southwest Missouri, he WOULD be taken care of!

Take him to McDonald County, the "Good ole boys" down there will take care of him! The State of Missouri will keep him in jail for several years before ever having a trial and sentencing. Definitely the court system dropped the ball again! Thus the community of Golden City and the citizens of Barton County and residents of Missouri are all grieving at this senseless crime against an innocent little child.

Give him the lethal dose asap, unless you want to torture him first.

Judge simm's retirement should go to the family he should be held accountable...

I think judge Simms should loose his retirement pension

Start a petition to the state to take judge Simms retirement pension and give it to the little girls family.

I agree but. Tax payers would be the ones paying. the judge should be held accountable petition the state to withhold his retirement pension and turn it over to the family...

There is not justice in Missouri. There is a person who runs people down for fun and has been around and around the in the court system only to be set free to murder time and again. We left there, we won't even so much as visit that state it is so corrupt it is frightening!

I am so ANGRY That I am NOT going to say what I want.

Law enforcement can arrest the criminal many times IF the judge keeps turning them out in the street that's hardly law enforcement failing this child ..that's the judicial system failing her..why was this case in Polk county anyhow if the crime took place in Dade county?

What this tells me is Officer Ruth Cottingham was so disturbed by this maniac and his past record she did what she could to STOP him,all she needed was the state of Missouri to follow through on their end to protect the community and its citizens,wow, what a slap in the face to law enforcement, and to all of us.This really"shows me" that the officials elected to represent us and to hand down justice, just dont have the time and dont really care. Its the Ruth Cottinghams and the little people who make up our communities that care. Such a lack of respect for peoples lives and for those whose job it is to protect us.Shameful.

and this is what is wrong with the judicial system. People complain that the "Old West" was so harsh with their hangings and public stonings etc......but ya know what.....there weren't repeat offenders in the "Old WEst"

If anyone should be sued it should be Judge Sims. He had the opportunity to review the case and to rule the outcome. It looks like he ignored the crimes, or chose to overlook the severity of the offenses. There is absolutely no excuse to dismiss three revocation hearings that would have put this lowlife behind bars and kept the community safe.

I agree, the Judges need to be held accountable also for letting repeat offenders free. If this is OUR justice system we will need harsher penalties for sex abuser, murderers etc.. and good ole fashion hangings in the town squares !! These prisoners that sit in our local jails that get 3 meals a day,exercise and tv are getting it toooo easy !! We are paying for this monster to eat, sleep and what ever else he gets !! I dont want to pay for him, I would rather pay the jailer to whip the crap out of him !!

Money is the sum of all evil. As long as all of these high powered people are getting their big pay checks , I don't think that they would really care to take the time to read over any case files anymore..thst takes too much time..wich results in a lot of rapist, killers, ect, going back out on the street to stalk and kill more innocent people. You Judges should be ashamed of yourselfs!!!

SHE DID THIS PUBLICATION TO CLEAR HER CONSCIOUS AND WASH AUDRIAUNNAS BLOOD OFF HER HANDS. DUE THAT SHE KNOWS IF SHE WOULD HAVE MADE DIFFERENT CHOICES ABOUT THE EXISTENCE OF THIS BEAST THAT HAS NO FEAR, RESPECT FOR ANYTHING THAT SHE COULD HAVE PREVENTED THIS HAPPENING IN AN INADVERTENT WAY BY CHANGING THE CHAIN OF EVENTS IN TIME. BEING A FIT MOTHER, AND A DECENT HUMAN BEING, BUT NO, SHE WAS SO DAMN SELF CENTERED GOING BACK TO "I GOT ME A MAN, SO ITS OKAY IF HE HITS ME, MY DAUGHTERS, AND TAKES TAZERS FROM POLICE". WOW WHAT A BONNIE & CLYDE STORY. YOU ARE A LOUSY EXCUSE OF WHAT NOT ONLY A MOTHER, BUT TO SOCIETY. ITS INTERESTING THAT ONLY NOW THAT AUDRIAUNNA IS DEAD FROM BOTH RAPE/AND MURDER THAT SHE SO CONVENIENTLY IS NOW GETTING A DIVORCE. NOW THAT IT HAS HAD THE RAMIFICATIONS OF THIS BEAUTIFUL INNOCENT CHILD OF GOD WHOSE RAPE AND MURDER COULD HAVE BEEN PREVENTED IF THIS SO CALLED OUTSTANDING WELL PUT TOGETHER, FIT MOTHER DID HER PART OF ACTUALLY BEING A MOTHER AND PROTECTING NOT ONLY HER OWN HER CHILDREN'S WELFARE, BUT SOCIETIES WELFARE BY MAKING THE RIGHT CHOICES, NOT OBSTRUCTING JUSTICE WITH HER OWN LIES, AND DECEIT. THEREFORE HER ‘I GOT ME A MAN’ BASTARD ASS HUSBAND WOULD HAVE BEEN INCARCERATED BEHIND BARS….., NOT OUT ON THE STREETS ON THE RAPING/MURDERING 12 YEAR OLD BEAUTIFUL BABIES IN THIS WORLD.

And to sum up things real quick, this woman, above and beyond the knowledge of the police authorities, who knew her HUSBANDS OUTRIGHT PROBATION VIOLATION, YET NEVER REPORTED IT HAS just the same, if not more BLOOD ON HER DAMN HANDS DUE THAT SHE COULD HAVE REPORTED IT!!!!!!THEREFORE THE POLICE WOULD HAVE HAD HIM LOCKED UP!!!!!!