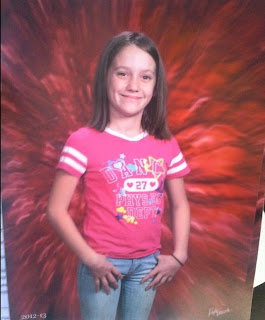 (From Pugh Funeral Home, Golden City)
Adriaunna Marie Horton was born April 19, 2001, to James William Horton and Wendi Renea Jackson, in Grove, Okla. She went to meet the Lord on Aug. 19, 2013.
Adriaunna grew up in Golden City, Mo., and was in the 6th grade at Golden City R-3 Schools. She attended the First Christian Church in Golden City and participated in the youth group and children's choir. Adriaunna had played ball from age 5 to 11. She loved horses, nature and being outside playing with her sisters, cousins and friends. She was a free spirit that always had a smile and a hug for you and wanted to help everyone. Adriaunna was a true little angel loved by her class and many others.

Funeral service will be at 1 p.m. Wednesday at the Golden City School Gymnasium in Golden City.