Flags to fly at half-staff Monday for Ike Skelton 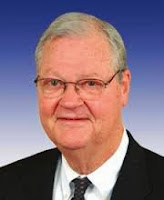 
Gov. Jay Nixon today ordered that the U.S. and Missouri flags at state buildings in all 114 counties and the City of St. Louis be flown at half-staff on Monday, Nov. 4, to honor longtime Missouri Congressman Ike Skelton, who passed away on Oct. 28. Cong. Skelton's funeral will take place in his hometown of Lexington on Monday.
"From his earliest days as Lafayette County prosecuting attorney, during his 17 terms in Congress where he dedicated himself in a bi-partisan way to serving Missouri and those in our nation's military, and through his final work on public commissions to honor our veterans, Ike Skelton's life embodied service done not for self, but for the greater good," Gov. Nixon said. "I was honored to present him with Missouri's highest military honor, the Conspicuous Service Medal, and even more honored to call him my longtime friend.
"Our country is more secure because of what Ike Skelton accomplished in Congress in a manner that was intelligent, humble and dignified," the Governor said. "By lowering the flags, we remember his legacy and pay our respects to this great American. The First Lady and I offer our thoughts and prayers to his family as they are joined by Ike's many friends in mourning his passing."
Posted by Randy at 3:43 PM