Teachers, leave that old stuff behind; it has no place in our 21st Century school 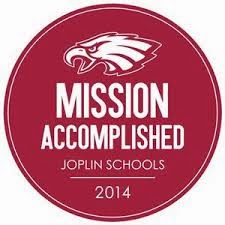 Volunteers expecting to find an air of excitement as East Middle School teachers prepared their rooms in the new building for the first day were caught off guard last week.

The volunteers told the Turner Report they found some teachers angered, some in tears, as the rooms they had carefully prepared with the idea of making them warm and inviting for students when they returned from Christmas break ended up anything but that.

"That was not what we thought we would see. Those teachers were there on their time working to get things ready for the kids and they get slapped in the face. I thought this was all supposed be about the kids."

From all appearances, it was about administrators making a favorable impression on local and national media.

At least three teachers, after setting up their rooms they way they wanted, returned to work on them some more and found that everything had been taken down, as R-8 Administrators wanted no kind of personal items to detract from the aesthetic beauty of 21st Century learning.

Teachers were also forced to spend time Friday hiding some items in closets so they would not get in the way when the media came to East and the adjoining Soaring Heights Elementary School for a grand unveiling on Sunday. That event, as well as the first two days of school in the new buildings was canceled due to weather conditions.

Two volunteers told the Turner Report there appeared to be no one in charge of telling volunteers who needed help or giving them any guidance, even though Superintendent C. J. Huff and other administrators were hovering over teachers as they worked.

"They wanted to make sure things were exactly the way they wanted them," a volunteer said.

(The volunteers are not identified to prevent retaliation against the teachers they were helping.
Posted by Randy at 4:54 PM

The thinking steps are the most ignorant idea ever. How long before a kid gets his head cracked on those? That money could have been spent on better things. I'd rather have a homey school than a designer school.

I don't know how to tell the volunteers this but CJ Huff couldn't find his own butt in a paper bag, and the other administrators are worse because they are dependent on him and Bessie to tell them what to do. Total waste of oxygen and space. And you damned sure won't see them doing any actual work, unless you consider demeaning people to be work.

Let's be sure this little bit of news gets to the national media, along with all the other interesting news items at the moment. That might be more interesting than Angie's idea of appropriate decor (cold and sterile).

Teachers should know by now that they don't count in R8. Why is anyone surprised at this action?

It's always about the show. They've done this kind of thing every time they open a new school. When Cecil opened, they wouldn't let teachers bring file cabinets or tables because they weren't new. They even went so far as to throw away items teachers had purchased with their own money. Added to that was the fact that there was no storage so many of the teachers were at their wits end. Storage has since been added by PTO work.
Again, not about the kids or helping the teachers reach the kids; all about the show.

How do Joplin teachers stand it? First no books. Now nothing personal in their rooms. We would not stand for that treatment where I teach. We're lucky though and are treated respectfully really all the time. I'd leave the profession if I had to teach there. It's not worth it. The kids are the ones who pay the price. It isn't about the kids. It's about egotistical administrators and a lax school board.

So, the administrators are taking stuff from the teachers at East and the new grade schools and giving it to the teachers at the old schools? I don't want their stinking hand me downs, thank you, just because my building didn't blow down. Bess can keep them and stick them somewhere...

I think, then, that no principal or administrator anywhere should be able to personalize his or her space, including Bessie's $50,000 furniture in her office. Or did she fleece us again and take that with her to her invisible office? Nothing for anybody but the sterile walls that reflect the learning that goes with R8's version of 21st Century education. Barren and void. I already hate the place and the paint isn't even dry.

Seems like they should've said what they wanted a long time ago just to be fair. But that would never occur to these people. They think only of themselves and how they are looking for the media.

I think, then, that no principal or administrator anywhere should be able to personalize his or her space, including Bessie's $50,000 furniture in her office. Or did she fleece us again and take that with her to her invisible office? Nothing for anybody but the sterile walls that reflect the learning that goes with R8's version of 21st Century education. Barren and void. I already hate the place and the paint isn't even dry.

Seems like they should've said what they wanted a long time ago just to be fair. But that would never occur to these people. They think only of themselves and how they are looking for the media.

Teachers are always in last place in R8. That's why the non-teaching staff makes so much more than teachers. Heck, even the copy center guy makes more than even experienced teachers with advanced degrees. Teachers are a mere nuisance that must be endured in Huff and Besendorfer's eyes. Otherwise, they would try to protect their teachers and would be more respectful toward them.

Oh, please, please come back to our meetings and tell us again how much you appreciate us and all we do for the kiddos. Sadly, your actions speak louder than your words.

So much for personalizing the educational experience and building rapport...

It would be appearance and not substance that gets Huff's attention.

And they wonder why no one wants to stay and teach in Joplin anymore. Could it be the lack of respect? I'm thinking so.

This is total bs. Completely untrue.

So if we walk through those schools we can expect to see lots of the teachers' personal decorative touches in their rooms? I think that's wonderful. I want my child to go to school in a warm and welcoming environment. That's what teachers create with their personal touches. I'm glad this is resolved, then. I'll be expecting to see those things when I bring my child to school.

Several years ago where I was teaching, I was admonished for not providing a bright cheerfully decorated room with posters and other decorations, even was suggested I put up some type of window treatment like cheap shower curtains, to make a more inviting learning environment. Mind you, I'd been taught that as a special education teacher, I was supposed to keep room decorations to a minimum to reduce visual distractions and sensory overload.

Several years ago, where I was teaching, I was admonished for not creating an inviting learning environment using brightly colored posters, decorations, etc. It was even suggested I follow others and put up colorful window treatments such as cheap shower curtains. Mind you, as a special education teacher, I was taught to minimize decorations to prevent visual distractions and sensory overload. Hope they have enough bandwidth to run all the gizmos. I guess actual paper and ink books are a no-no, also.

Yes, they do...they elected people who they thought they could trust & do the best for the schools, kids, students....but, now I do agree, get these fluff members off the slate & elect people who will consider your concerns & if they don't get rid of them, too...you pay the taxes, the $ to run these schools come from you ...stop being meek & do something...

The teachers don't have their own rooms at East. That is why I know this story is complete bs.

And 7:34am why in the world haven't you been in the school your child will be attending yet? Open house? Volunteering? Seriously I have no doubt If you decide to walk your kid into school you will be BLOWN away by the new schools! They are amazing! No east teachers were crying unless it was due to happiness.

This I the most absurd fabrication turner has created to date.

It's so easy to criticize when it isn't your job on the line. Remember, teachers aren't the only ones who vote, and there has to be someone new to vote for to make a change. That is an option this time, but it hasn't been too often. Did you vote? Are you happy with the results? What are you doing to make a difference?

Supporting the wrong candidate could easily make a teacher a target for dismissal in this district, in case you haven't been reading previous blogs. We will do what we can, but the rest of the patrons are much more free to support and work for candidates than teachers are. If an employee supports a candidate who doesn't win, that leaves the employee at the mercy of administration and the board after elections.

The teachers have their own classrooms but shared workspaces. I guess I wasn't as blown away by the bells and whistles as you were. Shiny baubles are no more my style than Coach handbags. Far more interested in what happens in the room than in what the building looks like. Children learn in far worse buildings than anything we have all over the world.

Please remember as you gush and brag that not ALL of Joplin's students are getting the luxury treatment that the students at Soaring Heights and Irving are getting. In fact, most of Joplin's students are stilll in ordinary buildings sitting in ordinary furniture. Yet, all teachers are under the pressure to make sure those students excel. While the students in the new schools are enjoying their state-of-the-art furnishings and schools, students at the old schools are getting the cast-off items from the Donors Choose projects taken away from other teachers.

The haves now have way more than the have-nots. Separate and unequal is the new 21st Century way in Jopiln.

4:44 & 9:59
This IS true--teachers were told not to have their things shipped over. If they did, they were shipped back. True story.