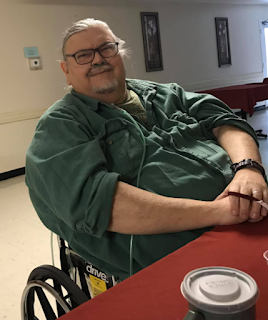 In four days, the Neosho Daily News will return to local ownership and while I never had the opportunity to talk to John Ford about it, I know it must have been pleased him greatly to see the newspaper he served for 20 years rescued from the vultures who owned it.

Sadly, that milestone for the Neosho community will arrive and John won't be here to celebrate it. Lee Ann Murphy, a former NDN reporter and editor, noted John's passing a few minutes ago on her Facebook page.

The last few years have not been easy ones for John who has suffered from various health problems with COVID-19 dealing the final knockout blow, but when John was at his best, which he was during his years at the Daily, he provided the Neosho community with a solid newspaper, despite the lack of support from GateHouse Media's corporate leaders who kept providing him (and the readers) with less and less while he kept striving to give them more and more.

John, in addition to creating a fresh, attractive layout for the Daily everyday graced the newspaper with an elegant writing style that he used in his weekly columns and the many features he wrote over the years.

John, who graduated from Parkwood High School and was one of many local journalists to come through Missouri Southern's Chart, had a genuine love and understanding of small town journalism, something former Daily News Publisher Rick Rogers, also a Chart alumnus, noted when he promoted John to managing editor in 2007:

I have the utmost confidence that John can continue the excellent editorial product that we have been able to produce the past three years. John is one of the finest reporters in this region and that, coupled with his ability to produce a well-designed newspaper, will allow him to excel in his new role.

"John has also been a part of the Neosho community for the past 12 years, and understands what you, our readers, want in their hometown newspaper - hometown news."
He certainly did and John always met the challenge when the big stories came to Newton and McDonald counties, with one example being his coverage of a candlelight vigil following the November 2006 fire that killed 11 people at the Anderson Guest House, a story he concluded simply and powerfully.
Midway through the service, the crowd joined in singing three verses of the hymn "Amazing Grace."

Becky Moyer, who lost her brother, Nathan Fisher, in the fire, credited the actions of caretaker Glenn Taff for saving several lives that night. Taff, 19, also died in the blaze while attempting to get residents out of the burning building. His wife, Amanda, 18, remains in a Springfield hospital with severe burns.

"I just want to get the message to Mr. Taff's family that he was a hero," she said.
Though he left the Neosho Daily News in 2015, John continued to write sharing many observations with his friends, and I consider myself fortunate to be among that sizable group. Thirteen months ago, he shared his thoughts after the passing of Kay Hively, who worked at the Daily for many years.
“My mind is sifting through the many hundreds of memories I have out there. Foremost, she loved her family -- including a circle of friends she considered family -- with all of her heart. Always there to lend an ear and extend a helping hand. And always, her faith shined through. I love her like another mother, and have no doubt she is currently reuniting with old friends and loved ones.”
A long, difficult battle has ended for John Ford providing him with that opportunity to reunite with old friends and loved ones. Thank you, John, for your service to this community and your dedication to your readers.
Say hi to Kay and Dean Keeling for me.
Posted by Randy at 7:33 PM

Thank you Randy. John was a very kind soul.

That was a beautiful tribute, Randy. John was so kind and supportive of our family when we were struggling with the school district. He wrote several articles regarding the issues, spent time with our son & was as baffled as we were as to the uphill battle. John, you'll never be forgotten. You touched many lives & hearts!

I will miss John Ford greatly as we grew up in the same neighborhood and went to the same schools all the way through high school. John, Joe Ellis and myself hung around alot in high school. John always kept us laughing joking around in the high school band. We had some great times and shared some great memories. Last time I saw John was in Salem when we went to visit him and his wife Pam. The video John shared after his stroke had me in tears. We all Love You too buddy and we will see you on the other side. God Speed. RIP John