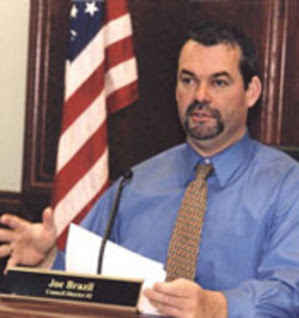 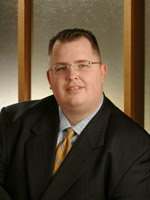 Jeff Roe, top political consultant and off-and-on assistant to Rep. Sam Graves, is the target of a lawsuit filed Thursday in St. Charles County Circuit Court by a political candidate who ran into Roe's particular brand of negative campaigning during the August 2006 Republican primary for the District 2 Missouri State Senate seat.
St. Charles County Commissioner Joe Brazil has filed a libel lawsuit against Roe, who used his blog, The Source, to launch two vicious attacks against Brazil in the week before the election.
In the March 17 edition of First Capitol News, a St. Charles County weekly, Brazil said, "He told lies, misrepresented facts and brought up an incident that happened when I was 18 years old and then lied about it," Brazil said.
Roe's first attack came in an Aug. 1 post when he wrote:

Is this what Missouri needs in one of its Senators? The Source thinks not. Perhaps Joe Brazil should examine his own past before he attempts to disguise himself as a Republican. Brazil has no business even thinking about running a campaign against incumbent Scott Rupp. Rupp is what Missouri needs in the State Senate. He is a responsible, strong, family man who Brazil could learn a lot from.

The attack Brazil was referring to in the First Capitol News interview came in Roe's Aug. 4 post when he reached into Brazil's past for this disputed nugget, which ran under the headline "More Skeletons in the Closet:"

Roe's critically-timed post was noted by the Kansas City Star in an article that ran in its Feb. 6 edition:

Last year, Roe trained the focus of his daily political blog, The Source, on a state Senate race in east Missouri. Roe talked about the death of a best friend of Joe Brazil, a candidate in the race whom Roe opposed.
Brazil and his friends were dumping sand in their high school parking lot for an unauthorized "beach party" during their senior year. Brazil was driving a dump truck and accidentally ran over his friend while backing up.
Roe wrote that alcohol was involved. Brazil denied it; authorities had filed no charges.
Still, the story zipped through cyberland, and Brazil lost.
Asked about the Brazil race, Roe said, "If they don’t like it, then they don’t like the truth."

Mr. Brazil has vehemently denied the allegation that he was drunk or that he had any alcoholic beverages the night of the accident. Mr. Brazil's denial is supported by the Florissant police officer who was called to the scene and indicated in his report that Mr. Brazil was not drinking. No charges were ever filed. In addition, classmates of Mr. Brazil who were with him the day of the accident have also indicated Mr. Brazil was not drinking. A story discussing Mr. Roe’s August 4, 2006 web posting appeared in the St. Charles Suburban Journals which quoted Mr. Pierce's mother as saying she never blamed Mr. Brazil for the accident and that to her knowledge alcohol was not involved. Mrs. Pierce went on to state
"believe me if it had not been an accident I would have prosecuted...but he (Joe Brazil) was as tore up as I was."

Brazil provided this quote concerning his reasons for filing the lawsuit:

I cannot put into words my contempt for anyone who would even bring up this event to pursue a political agenda much less lie about it. We have asked Mr. Roe to remove the posting and he has refused. At this point we felt we had no alternative but to file this lawsuit. We hope that by doing this we can remove the posting and send a message to Mr. Roe that politics does not give him the license to lie and distort the truth. At some point someone has to tell Mr. Roe that his influential friends and money do not exempt him from following the law and we look forward to allowing a jury to make this decision based on the truth."

I do not like Jeff Roe he is the most disturbing kind of politican. He took a tragedy in Mr. Brazil's life and turned it into a complete lie. Joe Brazil is a honest man and he is to good to be in the same room with Jeff Roe

Joe Brazil if a phony! He was a Democrat when he lived in Florissant. He also is a drunk.