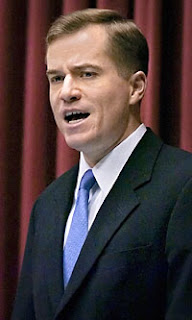 With all of the traveling Governor Matt Blunt has done in recent days to sign bills, it should come as no surprise that he plans to come to Anderson 10 a.m. Friday to sign Rep. Kevin Wilson's bill mandating sprinkler systems for group homes into law.

While I rarely see anything positive about these purely political multiple signing stops, this one should be an exception. The signing will take place at the location of the Anderson Guest House where a November 2006 fire took 11 lives and provided the impetus for the Wilson bill.

Though changes in the bill have made it less effective than it should have been, it is still an important step to protecting people who have no way of protecting themselves. For this bill to be signed into law only a few months after the fire is a sign that our elected representatives do spend time working on meaningful legislation.
Posted by Randy at 2:47 PM

This one is a lifesaver. I can appreciate that. Like most legislation, it doesn't cover enough but this is a good starter.