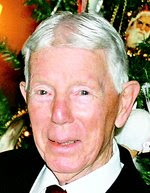 Naturally, I was mortified both for the girl and for Dick, since it appeared that one of my students was not aware of the results of the sacrfices he and his fellow servicemen had made to keep America safe.

A world without Dick Ferguson is hard to contemplate, but it seems fitting that he was called home just in time for Veterans Day.

Randy, Dick Ferguson was one of the kindest men I met during my time in Carthage. I truly enjoyed his visits to the old Press office. He would come visit and share a compliment and a criticism. And when he spoke, we all listened. Dick Ferguson was a true Carthage gem. He will be missed.

Randy,
Thank you for the kind words about our Grandfather. He truly was an American Hero and much more. He will truly be missed.
David Ross