A chapter-by-chapter rundown on 5:41: Stories from the Joplin Tornado 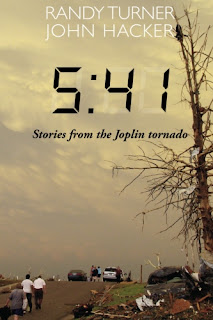 5:41: Stories from the Joplin Tornado became available online last night at its e-store. Readers can also buy it through Amazon and will be available shortly after that from other online retailers.

The first shipment of books for local stores will arrive in about a week to 10 days.

The book highlights the reporting and photography abilities of my co-author, Carthage Press and former Joplin Daily Managing Editor John Hacker and my reporting and essays, but it also includes a significant amount of information about the May 22 tornado that forever changed life in Joplin, Missouri.

Following is a chapter-by-chapter rundown of what is included in 5:41:

Chapter Four- Death, Destruction Hit Joplin, Missouri- My essay on the morning after in Joplin

Chapter Eight- God Was With Me- Melissa Rainey-Campbell's survival story

Chapter Nine- Back to the Country For Me- Diamond High School graduate Gary Harrall made a momentous decision after his Joplin home was destroyed.

Chapter 11- Sarcoxie Soldier Saved Lives at Wal-Mart- John's story on Jeffrey Price, one of the heroes at the 15th Street Wal-Mart

Chapter 13- McCune-Brooks Deals with Disaster- John offers a look at one of the overlooked stories of the tornado, the yeoman work done by those at McCune-Brooks Hospital in Carthage, which had to take much of the traffic that normally would be going to St. John's.

Chaper 14- Code Black- My story of life and death in the 15th Street Wal-Mart.

Chapter 16- Hall's Half Hour- Michael R. Sharp takes a unique look at the entire tornado as an act of the devil, but at the same time reaffirms the faith of the people of Joplin.

Chapter 17- A Graduation Day I Will Never Forget- It was a day that certainly will stand out for one of my former South Middle School students, Lacy Heiskell, who offers her first person account.

Chapter 18- In An Instant, Everything Was Gone- Iris Fountain tells how her family survived the tornado.

Chapter 20- The Day That Changed Everything- Joplin High School student Shaney Delzell waits out the tornado at Wal-Mart.

Chapter 21- The Voice of Joplin- My story on the incredible work done by Zimmer Radio which helped hold the community together in the time right after the tornado and since.

Chapter 22- Lucky to Have a Home- Joplin High School freshman Denton Williams' final year at East Middle School was cut short, but he and his family made it through.

Chapter 23- Life of Will Norton celebrated- My coverage of the memorial service for Will Norton, who died shortly after graduating from Joplin High School

Chapter 24- The Story That Affected Me for Life- Shanti Navarre's tornado story, which includes thoughts about the death of her daughter Cheyla's friend, Will Norton

Chapter 26- How Will Norton Led Me to Joplin- Rose Fogarty tells the story of coming from St. Louis to help with tornado recovery and the formation of the St. Lou Crew for Joplin

Chapter 28- Calm in the Storm- That same teacher, Andrea Thomas tells the story of how faith helped her and her husband Joe survive.

Chapter 29- Joplin Forever Changed Our Hearts- Tanya Snedden, a volunteer from Harrisonville, writes about her experiences.

Chapter 30- Joplin's Apocalypse Now- My trip through Duquesne and the apartments behind Wal-Mart, including my conversation with the father of Pizza Hut hero Chris Lucas.

Chapter 33- Finding "Hi" in My Joplin Classroom" A special gift survives the tornado.

Chapter 34- The School Year That Never Ended- East Middle School students come to the Fourth Street Bowl three weeks after the tornado for a final get-together, but the belongings of many students remained unclaimed

Chapter 39- In Memory of Lives Lost- The obituaries of those who were killed in the Joplin Tornado
Posted by Randy at 9:49 AM