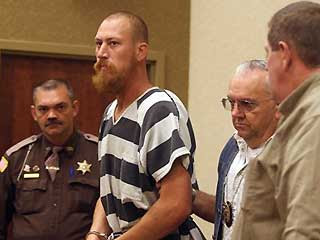 Chris Collings, Wheaton, convicted in March of the brutal rape and murder of nine-year-old Rowan Ford of Stella, filed his first notice to appeal his death penalty sentence Monday in the Missouri Supreme Court.

Collings' public defenders had filed the notice to appeal in the trial court May 21.


Collings was convicted in March and the words that convicted him came from his own lips as jurors listened to a recording of Collings  telling Barry County deputies how he came to brutally rape and murder the Triway Elementary fourth grader, for whom he had been a babysitter at one time.

The jurors heard from Collings’ lips how he, high from a combination of alcohol and marijuana, crept into the fourth grader’s bedroom, lifted her from the bed and took her to his home, where he violated her. As he was taking her back to Stella, he said, she managed to get a glimpse of him, so to save his own life he took hers, strangling her.

Collings insisted throughout his interviews with law enforcement officers that he, and he alone, raped and murdered Rowan Ford and that her stepfather, David Wesley Spears, had nothing to do with it.

“The only thing he’s guilty of is leaving that house and leaving that little girl alone,” Collings told deputies.

Spears’ appearance at the trial was anticlimactic. He was called to testify for the prosecution but exercised his Fifth Amendment rights, refusing to say anything that would incriminate himself.

Spears' trial is scheduled to begin November 5, five years and three days after his stepdaughter was murdered. A pre-trial conference is scheduled for August 27.