Sinquefield drops another $100,000 into obsession with ending teacher tenure

The organization is called Teach Great, which sounds like a wonderful idea, but in reality as with so many organizations these days, the name is designed to confuse the public into thinking it is something which it is not.

Teach Great, which can be found at teachgreat.org, has one purpose, to end every protection that Missouri teachers have.

If  Teach Great is successful in what it is trying to do, put an end to tenure in front of Missouri voters, then no school district will ever have to spend the money the Joplin School District is spending in its efforts to get rid of me, because administrators will be able to fire teachers at will without any regard to experience or skill.

Teach Great registered a political committee with the state and since that time has received slightly over $175,000 in contributions. Of that total, $175,000 came from retired billionaire Rex Sinquefield, the same man who believed that public education was created by the KKK.

The latest contribution, $100,000 was made Friday, according to Missouri Ethics Commission documents.

Teach Great's belief on tenure is as follows: 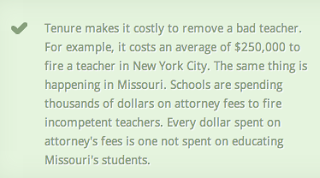 Supporters of the ballot issue, such as Sinquefield and the misnamed Students First organization, are hoping to have it on the ballot in 2014. A lawsuit challenging the ballot language was filed earlier this month by educators.
If this measure is approved by voters no teacher will ever feel secure about his or her job ever again. And that most definitely includes even the best teachers...especially if administrators are unscrupulous or want to bring in younger, cheaper teachers, regardless of quality.
Tenure does not make it impossible to fire teachers. All it does is require school districts to have a hearing before removing a tenured teacher. Obviously, even that does not happen often, as we have seen in the Joplin School District. Ways have been found to remove many excellent teachers and more have been targeted. And only one has made it as far as a hearing during the current administration, we heard during the hearing Thursday.
The only purpose of eliminating teacher tenure is to further weaken public schools.
Posted by Randy at 5:28 PM

Randy.....I am guessing you have a lawyer. I would have that lawyer hold up any proceedings against you until you can find out if Rex Sinquefield or one of his shell organizations has contributed ANY money now or in the past to tornado relief or the school district. You blog on the Huffington Post and the last thing rich and entitled people want is someone speaking out about what they do. I bet they are trying to fire you for speaking out and I bet he gave money to Bessendorfer. She sounds like a sleaze bag.

Sinquefield has plainly bought the Speaker of the House,Tim Jones, and he has enough money to buy a low life school adminstrator. Get your lawyer to have Bessendorfer file whatever it is called when a lawyer wants to know if you recieved payment or things from a person that influences your decisions. This railroad job on you smells funny.