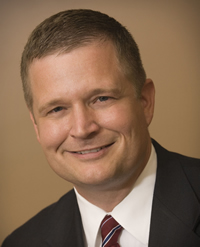 
In the tornado aftermath, Huff acted decisively to reopen school for the entire district just 87 days later. Among staff, the district motto informally became “Every child, every day, no matter what.”
Although insurance money would cover basic rebuilding of Joplin High School, Huff saw an opportunity for something more — a state-of-the-art facility fit for 21st-century learning. Some residents objected loudly to the expense of an upgraded facility. But Huff persisted, educating the community about why it was so important to the city’s and students’ future.
“He was tireless,” says Carol Stark, editor of the Joplin Globe, calling Huff a man of “principles and morals” who solicits input widely and then “questions whether a decision is the right (one).”
In the case of the contested school bond, the superintendent personally sought out the critics, Stark says. He would call individuals who had written critical letters to the editor in the Joplin Globe and often meet them over coffee. The bond proposal was approved by 46 votes.
Posted by Randy at 10:50 AM

Truly, Ms. Stark has forgotten her role as a journalist, which explains why this man and his colleagues have gotten by with as much as they have--no one is informing the public of the true state of affairs of Joplin Schools. Shame on you, Carol Stark. Hang it up and go find another job. You owe your allegiance to the taxpayers, not to the prominent citizens of the community. Tell the truth, the whole truth, and nothing but the truth.

I'll be dropping my subscription. Not getting any real news, anyway.

Yes, and we can all see how well that 21st Century learning is going. Scores down. Teachers leaving in record numbers. Public discrediting of a teacher who dared to point out the flaws. Superintendent making money with his tornado speeches. Assistant superintendent doing whatever she wants, like taking away teacher rights to representation, without bothering with the Board. Too much more of this kind of principles and morals, and the district will be too far gone to save.

A win of 46 votes is hardly a sensation. It's squeaking by with no room to spare, and what consensus there was has been destroyed. And how long are you going to keep saying 21st Century? We're 13 years into it, for Pete's sake. Move on. Hopefully toward something with common sense, like the colleges and universities use. You know, a combination of books, pen and pencil, computers. Quit looking for bragging rights and speech material and concentrate on what the kids really need for a change.

Insinuating that an innocent man is a pedophile in order to protect your own miserable reputation is hardly moral. Maybe Carol Stark needs to use a dictionary.

I wonder what Carol Cowan't high school journalism teacher would think about her obvious bias. Maybe she should go back to school for a refresher course in basic journalism.

When Dr. Huff arrived in Joplin, we had concerns about his youth and inexperience, but I still want to believe that he really cared about kids first. I don't want to think that he was not what he appeared to be back then. That's just hurtful. I think he has allowed the fame and glory of the tornado to alter his judgment. I hope, for the sake of the community and the students and their teachers, that these situations are all resolved soon so the new year can start off on a positive note. It's time to rebuild from the inside out.

Clearly Dr. Huff is well on the road to being a famous educator. Look how well that turned out for a former legacy ivy leaquer. "Rarely is the question asked: Is our children learning?