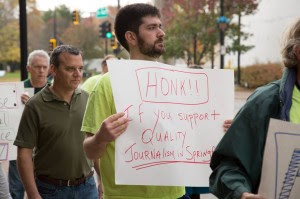 The United Media Guild is picketing GateHouse Media newspapers in Illinois where staff members have gone seven years without raises.

GateHouse Media is the owner of the Carthage Press, Neosho Daily News, Pittsburg Morning Sun, Big Nickel, Miami News-Record, and Grove Sun in this area and more than 300 newspapers across the United States.

From the United Media Guild:


GateHouse Media and its parent company, New Media Investment Group, is operating with strong cash flow. the company is paying dividends to shareholders and buying new properties left and right.

But it is taking a taking a hard “no raises” negotiating line in contract negotiations at the State Journal-Register and Pekin Daily Times — even though veteran journalists at both newspapers have gone seven years without a raise.

So many of our members at both newspapers staged informational pickets at lunchtime Monday. Members of the labor community and other civic activists joined them on the street in solidarity.