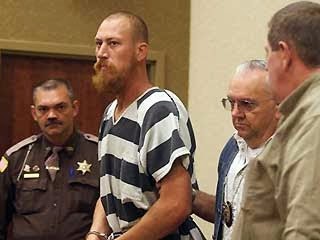 The Missouri Supreme Court Tuesday rejected child-killer Chris Collings' motion for a rehearing of his appeal of his death penalty conviction.

Collings, 40, was sentenced to death for the November 2, 2007, murder of nine-year-old Rowan Ford, a fourth grader at Triway Elementary School in Stella.

The court heard arguments in the case January 8, with public defenders representing Collings asking that he either be granted a new trial, be sentenced to second degree murder instead of first degree, or resentenced to life in prison without possibility of parole.

The attorneys cited a number of reasons for the requests including the following, all of which were rejected by the judges.

-Clark kept Collings talking even though he was aware Collings had an attorney.

-The prosecution failed to prove an element of first degree murder, that Collings had "coolly reflected" before killing Rowan Ford. Testimony indicated that Collings "freaked out" when he realized that Rowan had recognized him after he raped her.

-The judge should not have allowed the prosecution to show "excessively gruesome and prejudicial" photos of Rowan Ford.

-The judge should have declared a mistrial after the prosecutor simulated the strangulation of Rowan Ford in front of the jury.

-Chris Collings has shown "deep remorse" and "accepted responsibility" for the murder.
Posted by Randy at 5:59 PM

Deep remorse or not, part of accepting his responsibility is also facing the consequences.
Time to get right with God.

Finally! A recent Supreme Court decision that I can embrace amd agree with! This guy needs an extremely slow and painful malfunction, televised and shown publicly, to exact justice for what he did to that young innocent child.

pretty cut and dry, this creep needs to fry