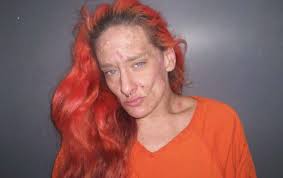 A Carl Junction woman charged with statutory rape after being found naked with a teenage boy is free following a judge's ruling at a bond hearing this morning in Jasper County Circuit Court.

According to online court records, Judge Joseph Hensley ordered Francesca Lauren Mathis, 37, released on her recognizance. She will be under house arrest and required to pay for and wear an ankle monitor at all times.

Mathis will be allowed to meet with her attorney and to attend court hearings and can attend treatment sessions if they are approved by the court.

A stipulation set earlier by Hensley requires that she have no contact with anyone under the age of 18.

The next hearing in the case is scheduled for 9 a.m. February 19.

The alleged crime was detailed in the probable cause statement. Carl Junction police officers had come to the home at 110 Birch Street seeking another suspect, heard noise from a room within the house and spotted Mathis, who was naked and told the officer not to come in because she was in that condition.

When she slid down to the foot of the bed, I could see the skin of another person in the room. I asked who was in the room with her and a male identified himself as (name redacted). They came out and (the boy) went outside with me to speak about what was going on.

As we walked up, I asked if he and woman were having sex and he said they were getting ready to. I then had Mathis step outside step outside (and) read Miranda warnings to her. She stated she understood and then confessed at the scene and again later in a recorded interview at the jail she had been having sex with (the boy) since April of this year and they had had intercourse on 12-18-2019.

On 12-27-2019, at the Children's Center in a CAC interview (the boy) disclosed that he and Mathis have been in a sexual relationship for most of the year.

I will set the "over/under" at 2 and a half, on the amount of STD's present. Let the wagers begin.