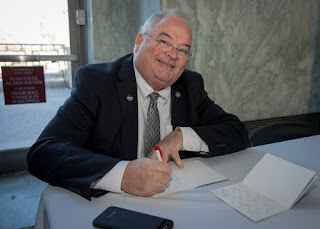 By Jason Hancock
Missouri Independent
U.S. Rep. Billy Long made it official Tuesday night, announcing in an interview on Fox News that he would be a candidate in 2022 for the seat of retiring U.S. Sen. Roy Blunt.

Long, 65, is a former auctioneer and radio show host who was first elected to Congress in 2010. He’s joining a crowded field of contenders seeking the Republican nomination. In his interview with Tucker Carlson, he said he is the best candidate to hold onto Blunt’s seat and help his party regain control of the Senate.

“You aren’t going to do anything until you get the Senate back,” he said, “and I’m the guy who can win that Senate seat in Missouri.”

Like every candidate seeking the GOP nomination, Long is publicly courting the former President Trump’s support. Politico is reporting that Long met with Trump on Tuesday afternoon to discuss his candidacy. He also hired former President Trump aide Kellyanne Conway as his senior advisor and pollster.

Trump won double-digit victories in Missouri twice, and every candidate in the Senate race is competing for his endorsement.

In entering the race, Long joins U.S. Rep. Vicky Hartzler, disgraced former Gov. Eric Greitens, recently-pardoned attorney Mark McCloskey and state Attorney General Eric Schmitt. Other than Hartzler, who kicked off her campaign with a traditional rally in her district, each candidate has announced their Senate bid on Fox News.

Long giving up his southwest Missouri seat in Congress is sure to set off yet another crowded GOP primary to replace him.

Among those who are thought to be considering the race are state Sen. Eric Burlison, former Blunt aide Joelle Cannon, former House Speaker Elijah Haahr, state Sen. Lincoln Hough and state Sen. Mike Moon.
Posted by Randy at 9:14 AM

ANyone interested in trying to corner the sircus tent market cotact me.

With all these clowns running it's gonna take a yooge tent for the party!