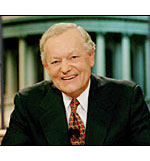 It seems hard to believe that nearly one year has passed since veteran newsman Bob Schieffer took the reins at the CBS Evening News on an "interim" basis. I have nothing against former KOAM newsman Brian Williams on the NBC Nightly News or Elizabeth Vargas at ABC, but Schieffer is the one whose program I am watching every chance I get.
Since Schieffer took over, you get the sense that this man puts the viewers first and has a great deal of respect for his correspondents. He has proven for years on "Face the Nation" that he is one of the best interviewers in business and his pointed questions to correspondents after their reports have brought out useful information on a daily basis.
From CBS' point of view, putting Schieffer in charge has been a win-win situation. Not only has he restored credibility to a program that was highly damaged by the last few months of Dan Rather's tenure, but he has helped the program (which is rated number one in this area, but third nationwide) to gain two ratings points at a time when the ratings of the other network newscasts are falling. (And from my point of view, having an anchorman who started out in newspapers is a plus, as well. Schieffer was a reporter for the Fort Worth Star-Telegram.)
I know CBS News has an apparent infatuation with Today Show host Katie Couric and she may well be the next anchor of the Evening News. Schieffer has indicated he does not want to have the position on a permanent basis. Too bad, but until he leaves, I'm sticking with the CBS Evening News.
As a last plug for Schieffer, if you get a chance buy his book "This Just In," about his journalism career. It is on sale for less than $10 at Books-A-Million in Joplin and is an enjoyable read.
Posted by Randy at 3:36 PM