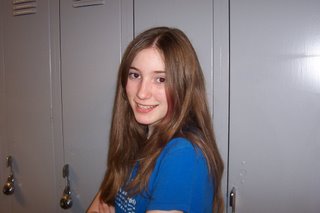 Judging on the third annual South Middle School Essay Contest was completed this week and eighth grader Fox Navarre captured first place with an essay on the effect drunk driving has on those who are left behind.
This year, we left the contest open for students in grades six through eight to write about any subject that was important to them. Subjects chosen by the students ranged from abortion to school financing, the danger posed by North Korea, gay marriage, cruelty to animals, obesity, and starvation.
Anyone who thinks that today's teens are totally self-centered and have no interest in the world around them is mistaken.
Miss Navarre's winning essay is printed below:

THINK BEFORE YOU DRINK AND DRIVE
By FOX NAVARRE

Have you ever looked back on memories of your childhood and finally realized what your parents were talking about; what you didn't understand then? It clicks in your mind and you think, "Oh, that's what they meant!" Most memories like these are fond to most people, but as I think back on my eight or nine-year-old self, the recollections aren't exactly full of sunshine and smiles.
It was during the summer that Allen, one of my father's employees, came to him asking for a place to stay when his mother had kicked him out. I remember being angry at his mother for being so cruel. It never occurred to me, then, that maybe there was a reason for it. In my eyes was a young man, wounded by a horrible parent, not a drunken 22-year-old working for my father, a restaurant manager. Naive as I was, I was open and eager to the possibility of adding a member to our family. I was even a bit depressed when they said he'd only stay for a week or two until he could get back on his feet. They graciously allowed him into our home.
Now that I sit and think about it, I quite clearly remember disliking him with a passion after the first week. He was a slob and having to share my bathroom with him, I found this out immediately. He was impersonal, indifferent and I never saw him out of his room or in the house at all for that matter. On the rare occasions that I did he was drinking a beer or eating our cereal. I was angry over the cereal, my fondest breakfast food at the time. I wished he was gone every day he was there. Those days grew into weeks and into months and every day I complained and whined. My parents used to think that I was extremely messy, but I was the neatest person in the world compared to him. I wanted him gone. Seven or eight months passed before the incident that scarred me...left haunting images pressed into my mind to this very day. It was yet another thing for me to blame on myself.
I'd had a bad dream one night nearing Christmas break and was asleep between my parents in their bed when the phone rang. My mother's movement was what woke me up but it was the phone ringing that caused me to stay alert. It's a habit of mine to listen in on conversations, or the side of it that I can hear.
I didn't know what had happened, but I'd managed to get back to bed, and snuggle against my father by the time Mom came back in to wake him.
"Allen's dead." The words were too much for me to handle. I wanted him gone, not dead. I wished him to leave our home, not his life. I cried. I remember the long drawn out sobs as the words repeated in my mind. "Allen's dead."
Allen had borrowed my dad's white truck (all the better to see the blood) claiming that he was going to visit his grandfather in the hospital. He had liked. He somehow managed to cram seven other people into a five-person cab of the truck, one of whom was a pregnant female. He had a lot to drink that night and passed out at the wheel. The truck swerved and slammed against the median where it slid along before spinning out into the middle of the road. By the time it was over, Allen was no longer in the truck. The seven others were unharmed other than a few scratches from the broken glass.
I didn't know the details of Allen's physical appearance afterward until I sat my mother down one day and said, "It can't be bad. It's not like his head came off." My mother had to regretfully inform me that it did, and so did his left arm, which had been hanging out of the window as he drove. This information is probably why I cringe every time my father rests his arm out of our open window when we travel. I yelled at him once for it. For a year afterward, images of Allen's mangled body and face haunted my dreams and I even developed a fear of closed doors, always amusing myself with thoughts of what was left of Allen hanging just on the other side. All because of a few beers and a set of wheels wrapped in a lie or two.
Before you get in a car with someone who has been drinking, think about a lot of the lives you could affect. I doubt that I was even on the list of who Allen would hurt when he died if he were to create that list. Even the most insignificant person to you cares, even if they want you gone. Care about them, too.
Posted by Randy at 10:01 PM

Great job writing this essay!
My life has been touched many ways by drunk drivers. Our beautiful 16 year old niece was killed when her car was hit by a drunk driver, and my sister was also hit by a drunk driver years later leaving her alive but disabled. On the other side of this is the fact that my nephew hit someone while he was driving drunk and it haunts him still today. You can't take away the pain, the heartache, the undying emotions attached to this terrible act. Watching someone you love, someone that your whole family loves, someone so innocent lying in a hospital hurting so bad and you being able to do nothing but pray. It has been years but I will never forget or get over the pain this caused so many people that I love, to hurt so terribly. When people say you can't change the world I want to scream yes you can .... one by one, you can!