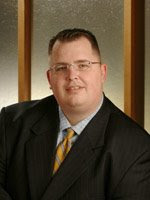 The attorney for Republican political operative Jeff Roe, the former chief of staff for Sixth District Congressman Sam Graves, filed a motion Aug. 6 in St. Charles County Circuit Court, asking that s summary judgement be granted for his client in the libel suit filed against Roe by St. Charles

Joe Brazil filed the initial libel suit against Roe in March 2007, as detailed in the March 30, 2007 Turner Report. Brazil took the action after Roe attacked him in two posts on "The Source" blog just before the August 2006 State Senate primary, which was won by Brazil's opponent, Scott Rupp.

Roe filed a countersuit at one point, but later dismissed the action.

Online court records show no hearings have been scheduled.
Posted by Randy at 7:15 PM