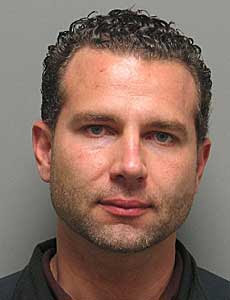 Milton "Skip" Ohlsen, the shady operator, who is scheduled to plead guilty Sept. 23 in federal bank fraud charges threatened to kill his wife if she tried to take their children, according to a petition filed by Ohlsen himself in a 2008 libel suit in St. Louis County Circuit Court.

Ohlsen, who has been connected to Sen. Jeff Smith and Rep. Steve Brown, in the Post-Dispatch investigation, and who was just connected to a bombing earlier today, is no stranger to the courts, having faced drug and weapons charges in the past.

Included among the "libelous" things allegedly written about Ohlsen on a website:

-He was being investigated by the Federal Election Commission (he was).

-One of the men sent a letter to Ohlsen's wife claiming her husband was having an affair so Mrs. Ohlsen would divorce her husband (she did).

-Ohlsen was involved in a domestic violence complaint (he was kind enough to file the copy of the police report that was featured on the website with his libel suit), including his wife's statement that "he threatened to kill me if I tried to take his children away from him and I am starting divorce proceedings. This was not the first time he has harmed me."

Court records show Mrs. Ohlsen was granted sole custody of her children, ordered to pay $1,836 per month child support, and pay $5,100 for her legal fees. So far, the payments have not been made, according to court records.

The libel suit was dismissed with the judge ordering Ohlsen to pay the costs.
Posted by Randy at 9:41 PM

I went to high school with this guy. He was always shady. Back then he even had to serve weekends in jail during our senior year, and we graduated in 1990 in St. Peters. I grew up skating with his little brother who is in prison right now for credit card fraud. I knew he was shady all along, but all this trouble is insane.