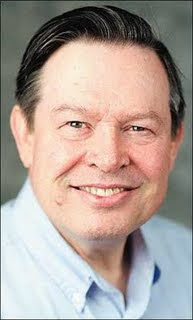 A no-confidence vote in Missouri Southern State University President Dr. Bruce Speck may be on tap when the university's Faculty Senate meets today.

Speck has been the center of controversy since his arrival at MSSU in early 2008. Brought in as the only finalist (the other withdrew to take another job), Speck's brief tenure has seen the dismantling of the International Piano Competition, an almost complete demolition of the university's international mission, chaos and fear among his top officials, and a series of incredible public relations blunders.

When copies of the university's newspaper, The Chart, were taken away from a career fair by the enrollment director because it had a story about declining enrollment. Rather than coming down on the side of the First Amendment, Speck issued a mealy-mouthed promise to look into the incident.

He has kept faculty members at their current salary level, while continuing to be involved in one pie-in-the-sky building plan after another, including the formation of a medical school at the university, which Speck says will require a $7 million building for dead bodies.

In the most recent fiasco, which for many was the last straw, Speck "entertained" Joplin Rotary members with a song that made light of the university's alleged financial crisis, joking about furloughs and other matters that faculty members and students do not consider to be joking matters.

Those matters are in addition to revelations from The Turner Report about racial discrimination accusations made against him during his time as provost at Austin Peay University in Clarksville, Tenn.

And sadly, this is only a partial list of the complaints that have been lodged against Speck in only a year and a half at Missouri Southern.

Whether the problem lies just with Bruce Speck or with his chief supporter among the university's Board of Governors, Dwight Douglas (or more likely with both) it appears the campus' long record of stability at the top has been completely decimated.

(Anyone with information about the Faculty Senate meeting or anything else having to do with Missouri Southern, please feel free to e-mail me or leave a comment.)
Posted by Randy at 5:43 AM

There are rumors that petitions to retain Speck are being circulated around town. Can anyone confirm this?

...and, of course, the faculty will endorse Randy Turner for the presidency....he's got all the right answers.

The problem the Faculty Senate is going to have is that at least one-third of its members are not tenured or are on one-year contracts. These people will be afraid that Speck, if he survives, will retaliate. And they should be afraid; there is no doubt that Speck would go after them.

Here are some more Speck offenses: Claiming to be a fund-raising expert when hired but not able to raise a single dime; sending ridiculous emails to faculty and staff; misspeaking in public all the time; constant criticism of the "previous administration;" frequently saying that certain MSSU employees should be fired; and the fact that Dr. Terri Agee, his senior vice president, has had enough and wants out.

I'm so glad he is no longer making messes here at Austin Peay!!!

We should have a secret ballot vote of no confidence on Speck and Douglas on a campus-wide basis. That way nontenured faculty can speak their mind freely and without fear. The senate has to find a way of certifying whatever vote results and then if the vote is overwhelming, the senate should call for their resignations.