Cynthia Davis: Keep your filthy paws off me: go pat down a Muslim 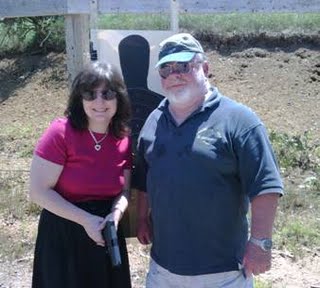 Soon to be former Rep. Cynthia Davis, R-O'Fallon, once again builds a bridge of peace toward the Islamic faith in her latest column.

Mrs. Davis addresses the issue of airport searches, concluding, "It's time for our government to stop violating our citizens and begin serving them."

Unless, of course the ones being violated are Muslims:

Like so many travelers, I was asked to step out of the airport boarding line for “the deluxe treatment”. My crime was that I was wearing a skirt. The TSA wanted to make sure I would not be able to explode the airplane; come on! Are they really afraid that a member of the Missouri State Legislature is going to perform an act of terrorism and suicide? I think not. This is a clear example of the absurdity of the system.


Three reasons why this should not be acceptable:

1.) The Fourth Amendment of our US Constitution states: “The right of the people to be secure in their persons, houses, papers, and effects, against unreasonable searches and seizures, shall not be violated, and no warrants shall issue, but upon probable cause, supported by oath or affirmation, and particularly describing the place to be searched, and the persons or things to be seized.”

There you have it. Nobody has the right to search our bodies without first obtaining a search warrant signed by someone who has sworn under oath that a reasonable suspicion exists that I am trying to perform an act of terrorism. Furthermore, seizing our shampoo, beverages and hair gel is clearly not allowed by the constitution, since these are legal substances.

How can we allow the national government to violate the constitution? Which amendment are they going to ignore next?

2.) What would happen if delivering passengers to their destinations was the responsibility of the airlines? After all, isn’t that what the airlines are already hired to accomplish? Each airline should administrate its own security procedures. If you don’t like the way the airline personnel examines your body with one company, you can switch to another airline. That’s how free markets work!

Some airlines could develop programs where frequent flyers and their employees are pre-certified so that a simple fingerprint or iris scan upon boarding is all that is necessary to prove your identity. The government should not administrate this type of program, but there is nothing wrong with a company collecting information on its customers and retaining that information in its private records. If the private company were doing this, it is merely customer information that will assist them to serve everybody better. If the terrorists don’t like being asked questions, they can fly on a more “terrorist friendly” airline. Hopefully, there will be none available to serve their purposes.

3.) Instead of trying to play “cat and mouse” games to keep ahead of the last terrorist method, why don’t we do more to actually get the people off the airplanes who are about to blow it up? The old expression is “Guns don’t kill people; people kill people.” This method of examining the personal anatomy of the travelers is not getting at the origin of the problem. Terrorism is caused by what is in the heart of the terrorist. It is ridiculous to presume that a bottle of water is really an attempt by innocent citizens to smuggle explosive liquids onto the airplane. In America, we used to be considered innocent until proven guilty. When we are forced to trash any legitimate liquid or gel, it is because of a governmentally enacted presumption that we are all guilty without any reasonable evidence to the contrary.

My personal body search was not based upon a concern that elected officials and middle aged mothers are now trying to destroy our nation through acts of terrorism and killing others. It was a symptom of being reactive rather than proactive. We have a broken system based upon a prejudicial assumption that everyone is trying to harm our country and commit suicide in the process. Some think that bringing shame and humiliation upon all of us will make us feel safer. The fact that our citizens are now being violated by body searches when they want to fly, and the fact that we are violating our own constitution to accomplish this, is a form of victory for the terrorists already. (The word “violated” refers to a total stranger touching parts of our bodies in places that would be considered sexual harassment were an employer to demand to do the same thing.)
When I was first elected to the Missouri House, we had metal detectors at the front entrance and all the other doors were locked. Shortly thereafter a security expert informed us that this really did nothing to keep “bad guys” out of the Capitol. We were told it was far safer to simply have more police officers roaming the hallways and being available to deal with the unique circumstances as they emerge. We traded away metal detecting machines for human intelligence and vigilance -something that machines can’t duplicate. This is a good model for the airline industry to emulate.

Greater scrutiny of those who buy one way tickets, pay with cash and originate from nations that are hostile toward us would make a lot more sense than our own government violating our citizens in the name of enhanced pseudo-safety. There is nothing wrong with acknowledging that the acts of terrorism were executed by Muslim men trying to kill Americans because of their religion. The Muslim religion teaches world domination and there is a historical record of them brutally killing their opponents, so this is nothing unusual. The men who blew up our buildings on September 11th, acted out of sincere dedication to their religion. Our law enforcement officers cannot protect us if they are required to deny reality and overlook the obvious. Good detective techniques rely on observing patterns.

After all the wasted money and angst inflicted upon hundreds of millions of innocent travelers, why have we not heard about how many terrorists have been caught through their “embarrass the customer” methodology? Our national government has provided us with another example of how iron-fisted governmental solutions fit into the socialist model, wastes money and harms all of us by suppressing free market solutions.

I feel sorry for the airlines because they are suffering lost business over these strange new invasive practices and have no say in the matter. I try to imagine how I would feel if the national government tried to search people before they could shop at my bookstore. Doubtless, my business would decline through no fault of my own. These searches are suppressing support for the airline industry. The bigger government grows, the more our free market businesses shrink.

One interesting side note: If these searches were so important, we wouldn’t see such wide inconsistencies between airports. Even though St. Louis does not have an international airport, they always give me the hand patting because I wear skirts. In Washington D.C., I wore the exact same skirt and even used my concealed weapon permit for my identification and they didn’t feel it necessary to pull me out of the line, X-ray or naked-body scan me or physically touch me.

It’s time for our government to stop violating our citizens and begin serving them.

Timothy McVeigh was a nice looking american and look what he did. This woman is far more dangerous that any muslim!

When, when will it end? This Sarah Palin wannabe will probably end up in Branson as an opening act for the Elvis impersonator.

One legislator said to buy time for, say, lunch or even a bathroom break, all someone needed to do was ask her a question and the rules of order would be out-the-door, so to speak, and she could talk for hours.

The ongoing question has been are the people of her district unaware or just plain stupid.