Remembering the "day that will live in infamy" 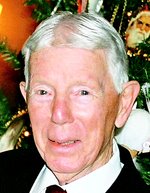 Several weeks ago, as I was selecting a speaker for the Veterans Day assembly at East Middle School where I teach eighth grade English the first person who came to mind was someone whose voice, sadly, has been silenced.

In my 12 years as a classroom teacher, the speaker who best conveyed the message of the contributions and sacrifices made by the men and women who serve in the military was Richard "Dick" Ferguson. I had the privilege of hearing him speak numerous times during my tenure at The Carthage Press and was fortunate enough to have him speak to my creative writing classes at Diamond Middle School in the spring of 2000.

As we observe the 69th anniversary of what FDR described as "a day that will live in infamy," the bombing of Pearl Harbor, I once again repeat this post from the November 8, 2008, Turner Report:


Since today marks the 68th anniversary of the Japanese attack on Pearl Harbor, the day proclaimed by President Franklin D. Roosevelt as a day "that will live in infamy," it seems fitting to remember a local who survived the bombing and who spent much time over the years making sure that no one would ever forget his comrades who died Dec. 7, 1941.

The following post is reprinted from the Nov. 8, 2008, Turner Report:

Naturally, I was mortified both for the girl and for Dick, since it appeared that one of my students was not aware of the results of the sacrifices he and his fellow servicemen had made to keep America safe.

A world without Dick Ferguson is hard to contemplate, but it seems fitting that he was called home just in time for Veterans Day.
Posted by Randy at 5:17 AM