Jetton charged with careless and imprudent driving, Sen. Crowell serving as his attorney 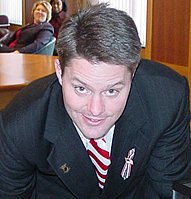 Former Speaker of the House Rod Jetton, R-Marble Hill, has had nnother brush with the law, according to online court documents.
Jetton was charged with careless and imprudent driving in Butler County after being involved in an accident November 8. The case was investigated by the Highway Patrol.
His arraignment, initially scheduled for December 20, has been rescheduled to January 6, following a request by his attorney of record, Sen. Jason Crowell, R-Cape Girardeau.

Jetton is also awaiting a February 3 trial in New Madrid County Circuit Court on a charge of assault involving accusations of rough sex with a Sikeston woman.

The former speaker also pleaded guilty in Laclede County Circuit Court April 23 to a misdemeanor traffic charge. According to online court records Jetton paid $10 fine after pleading guilty to a charge of operating his car without lights while using his windshield wipers. The stop was made by the Missouri Highway Patrol.
Posted by Randy at 3:22 PM

For some sick reason I am attracted to this guy.

Lock him up so Jessica can visit him.

The Republicans actually elected this short dumb ass case of insanity to be Speaker. Those that elected him are mostly all still there (some moved to the Senate) and in charge of Missouri's future.

I'm tellin' you...they're crazy. Nut cases most of them. Green balloons my a**.