GateHouse Media awards $1 million plus in bonuses: They're the right guys to right size 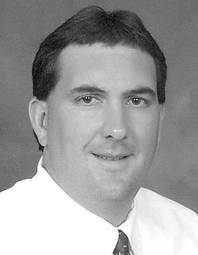 Add GateHouse Media's top officials to those who live in the lap of luxury on the backs of their employees.

At one time, it was called firing workers, then to the more genteel it became downsizing, but even that was too good for GateHouse CEO Michael Reed. In a company report filed November 2, Reed (pictured at left) used a new term that certainly makes the act seem much more civilized:

Over the past several years, and in furtherance of the Company’s cost reduction and cash preservation plans outlined in Note 1, the Company has engaged in a series of individual restructuring programs, designed primarily to right size the Company’s employee base, consolidate facilities and improve operations. These initiatives impact all of the Company’s geographic regions and are often impacted by the terms of union contracts within the region. All costs related to these programs, which primarily reflect severance expense, are accrued at the time of announcement.

Apparently, that right sizing was just the right size for GateHouse's Board of Directors.

Michael Reed, whose management of GateHouse Media continues to leave the company billions in debt, received a $750,000 bonus, including information that was buried at the bottom of the company's annual report, filed March 2 with the SEC.

Unlike the reporters, advertising salespeople, and others who have fallen victim to his "rightsizing," Reed has absolutely no worry about losing his job. If the company sells and the new owners send him packing, Reed is guaranteed three quarters of a million, including $500,000 in severance pay, a $200,000 bonus and continued health insurance payments.

COO Kirk Davis isn't far behind Reed. SEC records indicate Davis will receive $726,000 if new owners rightsize him, including a $461,000 severance payment and a quarter of a million dollar bonus.

GateHouse Media must be doing extremely well since this year's bonuses are over a quarter of a million more than the company awarded in 2010. At that time, Reed received a half-million dollar bonus, more than twice the $200,000 bonus stipulated in his contract. Ironically, that bonus was awarded the same time the GateHouse CEO trumpeted the news that his company was initiating more cost-cutting moves:

“We are in the process of implementing additional cost saving initiatives in order to better align our overall cost structure with current revenue trends.”

Not surprisingly, Reed did not mention the half million dollar bonus as he was talking about downsizing, whoops, rightsizing valued employees and shortchanging the customers at the more than 300 newspapers owned by GateHouse, including The Carthage Press, Neosho Daily News, and Pittsburg Morning Sun.

How can we expect the media to give us the lowdown on what is going on in today's economy, when the head honchoes of the media company are riding the gravy train while steering their products down the path of destruction?

(Note: The first source, and sadly, the only source until now to report on this, was Billy Dennis in Peoria, another town that has been slighted by GateHouse Media. Check out his story at this link.)
Posted by Randy at 7:35 AM

WhoreHouse Media has every right to pay the bigwigs a fat bonus from their overpriced advertising revenues.

This company owes over $1 billion in long term debt due in 2014. If you closely examine their performance and track record, there is no possible way they can meet their obligations. They cannot hope to meet the obligations, even if they negotiate the debt down to 10 cents on the dollar. It will take that, and a long extension, to keep this company alive on life support. Nationally, newspaper revenues have declined about 36% since the year 2000. They are projected to decline another 19% by 2016. The Wall Street Journal listed newspapers in the top ten "dying" industries. Keep in mind that these huge bonuses could not be paid without BOD approval. This is a publically traded company. What are the members of the Board of Directors thinking? Nobody in their right mind would buy this company. The top tier will take their huge bonuses and buy a big house in Connecticut or Martha's Vineyard. They will leave a train wreck of misery behind.

My only question is this? Where's the money going to come from to pay these huge severance bonuses when the company dies. Do they have it escrowed? Might be a good idea.

EVERYTHING about the management of this company is suspect. I worked for them for a few years in management and I am serious when I say there is something going on. Yes, the economy is down, yes there are problems common to all newspapers but there is GROSS negligence on the part of Reed and others. If I was an investor I would be getting some legal counsel.

I was in a management position with this company. When they wanted to restructure somebody out of a job, they start "squeezing" on them by being total jerks to them. The employee was set up to fail, and they were placed in impossible performance scenarios. All this to avoid a couple weeks of separation pay. I would rate my supervisors as the worst of my entire work history! It was actually shocking. Filing cabinets were punched. Derogatory statements were made. Cuss words were bandied about. They stopped shorted of any abuse that would voilate Federal guidelines of race, national origin, sex, and age. Legal counsel told me that they can get away doing just about anything they want, as long as they don't voilate any Federal statutes,and stop short of actually hitting somebody. I really couldn't decide whether the drama was scripted to intimidate and encourage my departure, or if there was a real anger management problem going in the case of this regional manager.

Here's my own comments on the GateHouse financial mess: http://pulaskicountyweb.com/smf/index.php?topic=26199.new

...Private companies can do what they want with their own money, and if the executives are performing well, they can and should be compensated well.

But what are the executives doing at GateHouse Media?

In addition to running the company's stock prices down the stairway and into the cellar, GateHouse executives have managed to accumulate an almost-unbroken string of losses for the last several years and piled up $1.2 billion of debt. That's "billion" with a "B."

Maybe it's not big bucks in Washington, but $1.2 billion is massive debt for most of the small towns typically served by GateHouse Media newspapers. The company's website reports that GateHouse has 90 daily newspapers with total paid circulation of approximately 789,000 and 289 weekly newspapers (published up to three times per week) with total paid circulation of approximately 686,000. That means for each of GateHouse's 1,475,000 paying subscribers, the company has $813 in debt.

What's wrong with that picture? ...

What are the consequences of trying to run a local newspaper with staff who in most cases are new to the community and take direction from people who don't live here?

Competition is good in the business world, including the media -- when people compete, they produce a better product and that means good things for customers. But if things continue the way they're going at GateHouse Media, it's questionable how long there will be competing media in this community. That, if it happens, will be a shame and a development I will sincerely regret.

As a recently "rightsized" GH employee, your blog post was spot on. Thanks for telling it like it is.

I too am a former manager at Gatehouse Media and got out of dodge on my own terms 2 years ago before they could "rightsize" me. I was fortunate. The company cares very little for its employees. The people in charge when I was there were grossly incompetent. Most of their "rightsizing" involved letting go of experienced managers and replacing them with employees from different departments for less money and no background in their new position. Hiring a publisher with no publishing experience in their most troubled market (Chicago) was a huge mistake. I feel for the good people and friends that I still have over there.

GayHouse is a joke. I am another piece of their downsizing. I will say that my supervisor was a piece of crap that should go out the door also. His day will come, I hope. Along with the other puppets that work with him.

Not to mention it's been over 5 years for any pay raises for "the peons" of Gatehouse thanks to these execs and their know-how on running companies to the ground while their pay continues to increase annually. These execs should really be paying back the employees whose lives they've destroyed.

I work for a Gatehouse-owned paper in a small town in Illinois. They just laid off our publisher, the head of ad sales and our news clerk. For the first time since 1869, there is only one full-time reporter at our small Monday-Friday publication. I used to be proud of my work and now we are so short-staffed I'm embarrassed to be a staff writer here. I can't imagine our paper, the only one in the county, can last much longer like this.