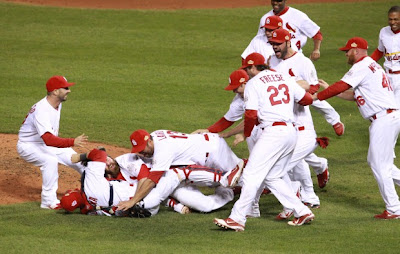 With three outs to go, the sold-out crowd was all on its feet, waving white towels, snapping photos on their cell phones and poised to storm the field to toast the most improbable World Series title that this storied franchise had ever won. There were already 10 Series flags fluttering above the right-field scoreboard more than any other team not named the Yankees and the only thing standing in their way was a quick close out by fire-balling closer Jason Motte.

Twenty four hours earlier, the Rangers were one strike away from a World Series title twice. But now they were suffering from the same fate of the Philadelphia Phillies and Milwaukee Brewers, who made the fatal mistake of not killing off these resilient Cardinals when they had the chance. The Phillies could have saved themselves the trouble of dealing with the Cardinals in the playoffs by simply letting the sagging Atlanta Braves win one game down the stretch of the last week of the regular season. The Brewers could have choked them off with one more win over the last two months of the regular season.

And the Rangers could have done in the Cardinals at any number of critical moments on Thursday night.

But now at the end of this chilly Friday night, they had to stand by and watch the Cardinals slip on those championship caps, hoist the World Series trophy and gallop all around the infield floating on a championship cloud.

When the Cardinals got within that amazing last strike to the World Series title, this is what they did:

Fly out to center.

Fly out to left.