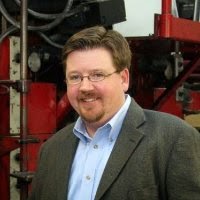 GateHouse Media has named Matt Guthrie as the new regional publisher for this area, putting him in charge of the Carthage Press, Neosho Daily News, Big Nickel, and the Pittsburg Morning Sun, among other publications.

Guthrie, who will be stationed in Pittsburg, had been the publisher of GateHouse's California group since April 2013.

The area publications had been without a publisher since the resignation of Steve Boggs late last year.
Posted by Randy at 5:21 PM