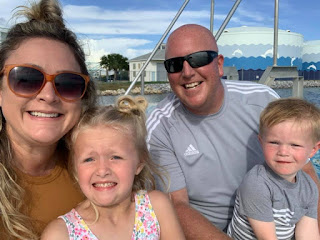 Surgery was performed today on Webb City Police Department Patrol Sergeant Brian Ward, who along with his two-year-old son were outside of their car while vacationing in Florida Tuesday and were hit by a drunk driver.

The accident took place in full view of Ward's wife Heather and their five-year-old daughter Reagan.


When the accident occurred Ward was preparing to put his son in his car seat, his wife said in a post on her Facebook page.

Knox landed about 30 feet in front of our vehicle and Brian was drug about 75 yards under the drunk driver's vehicle. I do believe that Brian saved Knox’s life by throwing him to safety. They had to remove the car from Brian.

Ward's right leg was badly broken and his left leg also sustained injuries. Twelve staples were put into the back of his head.

Knox Ward has a possible skull fracture and a brain bleed, according to Mrs. Ward.

To make matters worse, Mrs. Ward was told at the scene by a person she later discovered to be the drunk driver that her husband had not survived.

I know everyone is praying for Brian and our family. If you could take an extra moment to lift up my sweet baby girl. She saw the whole thing happen. She was the strongest and bravest little girl and I am so proud of her.

Today we lift one of our own up in our prayers.

Last evening (Tuesday, May 26th), while vacationing with family in Florida, Patrol Sergeant Brian Ward and his 2-year old son, Knox, were outside of their vehicle when they were struck by a vehicle being driven by a drunk driver.

Due to their injuries, both Brian and Knox were transported to separate hospitals where they were admitted to the respective intensive care units and are currently in stable condition.

Brian’s wife, Heather, and 5-year old daughter, Reagan, were not harmed in the crash.

Family and friends have established a benefit account at Pinnacle Bank in order to ease the financial burden of being hospitalized over 800 miles from home.

Donations can be dropped off or mailed to any Pinnacle Bank. Checks should be made payable to Brian or Heather Ward.

Here is a list of the Joplin metro Pinnacle Bank locations: