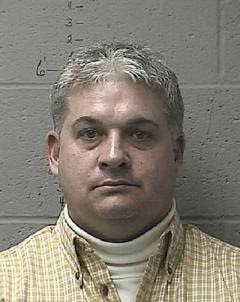 A June 27 trial date has been set for Rep. Bradley Robinson, D-Bonne Terre, who faces a felony charge of leaving the scene of an accident.
Robinson, 44, did not appear at an arraignment Friday in St. Francois Circuit Court, but entered the not guilty plea by letter, according to court files.
Robinson allegedly was driving his pickup on Jan. 1 when he struck a man, severely injuring him. Surveillance video purportedly shows Robinson and his wife changing places to make it appear that Robinson's wife Tara was driving, and then leaving the scene. According to the St. Louis Post-Dispatch, five passengers in the pickup have been granted immunity in exchange for their testimony against the Robinsons.

Court records indicate Tara Robinson's preliminary hearing, also scheduled for Friday, was postponed at her request, and will be held July 18. She is charged with a misdemeanor, making a false declaration.
Robinson is not seeking re-election.
Posted by Randy at 3:51 PM