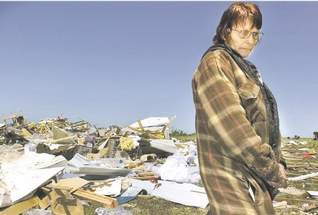 More eyewitness stories about Saturday's tornado are featured in today's Springfield News-Leader, which includes this description by Jeff French of Seneca:

French, who lived in California until earlier this year, looked around the living room in disbelief.

"I've been through hurricanes and earthquakes, but never a tornado," he said. "This is unrealistic to me ... big things were being tossed around like Tonka toys."

As soon as the storm passed, French ran across a field to his neighbor's house, where he found Deanne Gallemore distraught. Her husband had been killed as the storm destroyed their home.

Kim Herbert, who was at the Gallemores' on Sunday cleaning up, said Paul Gallemore, a retired barber, had been on the second story of the house when the tornado hit. Deanne survived by hiding in a closet.

"They've been married for over 50 years ... so 50 years of their life is in that house," he said, looking at the half-standing home now spray-painted with a bright orange "X," meaning destroyed.

(Springfield News-Leader photo)
Posted by Randy at 4:06 AM