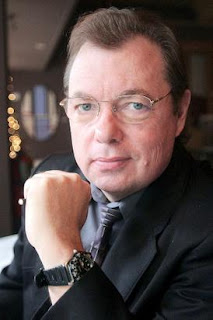 "The book is about the last few weeks of Quantrill’s life," said McCoy during a telephone interview from Emporia State University, where he is now an assistant journalism professor.

He grew up in Baxter Springs, not far from where Quantrill attacked a column of troops under the leadership of Union Gen. James G. Blunt in October 1863. Blunt, who was commander of the District of the Frontier, was moving his headquarters from Fort Scott to Fort Smith, Ark.

"This was after Quantrill had burned Lawrence," McCoy said. "Blunt saw a group of riders outside Baxter Springs, thought it was a welcome party, and sent his military band up front to play."

Quantrill’s Raiders killed more than 80 of Blunt’s 100-member escort.
"Blunt did escape with his life, but Quantrill captured his sword and some personal papers," McCoy said. "That was a sore point for him the rest of his life."

More about McCoy's books can be found at his website.
Posted by Randy at 8:43 PM