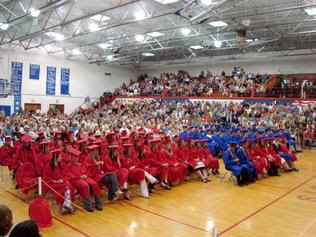 My alma mater, East Newton High School held its graduation ceremony Sunday, six days later than originally scheduled, thanks to the tornado that ripped through Newtonia and Granby a week ago Saturday. Rick Rogers and the Neosho Daily News offer coverage in today's edition:

Katlyn Peterson is the valedictorian of the class of 2008. Jessica Brust gave the invocation.

“It has been a long ride, and I think our class had a great bond,” said Alaina Lawson, ENHS Class of 2008 salutatorian. “We had our ups and downs, but we are still strong and I am thankful for that.”

Lawson then referenced the tornado and the damage it left in its wake.