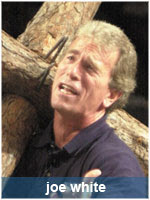 A federal court judge has ordered Kanakuk CEO and nationally known Christian speaker Joe White to stop trying to contact a sex abuse victim who is suing White for $10 million.

In the order, filed Monday in U. S. District Court for the Northern District of Texas, Judge Joe Fish said all contact between White and the Texas boy who was one of dozens molested by former Kanakuk Kamp director Pete Newman must be made through lawyers:

"Defendant Joe T. White will not encourage or request that any other person,
including Joe T. White’s family members contact, correspond, send packages, make
phone calls or otherwise contact the plaintiffs while this case is pending."

Attorneys for the boy and his family requested the injunction in a motion filed July 13. The motion indicated that White and Kanakuk officials had not left the family alone since the lawsuit was filed.

The unwanted attention began April 7, according to the motion. "Since appearing in this case, defendants have maintained regular communications with the plaintiffs, directly, by way of mail, telephone, and e-mail, despite repeated requests (from both plaintiffs and plaintiffs' counsel) that they not do so."

The latest such communication occurred July 8, the motion says,when "a package from Defendant White and his wife, arrived at the Doe home."

The e-mails, phone calls, letters, and packages have added to the boy's "emotional and psychological problems that stem from his sexual abuse," the motion said.

The $10 million lawsuit against White, Newman, and Kanakuk alleges that Newman's sexual assault of the boy and others came after White ignored obvious danger signals and allowed Newman to continue working with young boys.

The lawsuit was filed on behalf of a Texas child by his parents. The father of the child says White,a nationally known Christan motivational speaker, encouraged him to send his son to Kanakuk Kamp in Branson following a speech at a Promise Keepers meeting in Irving, Texas.

"Defendant Joe T. White appeared and lectured at a Promise Keepers event at Texas Stadium in Irvin, Texas. (The father) attended this event and heard (his) presentation advocating Christian values." White spoke of Kanakuk Kamp and distributed literature, and later sent letters and Internet messages to him, his wife, and other parents encouraging them to send their children to the Missouri camp.

The abuse also included games of naked truth or dare, and having the boy spend the night in Newman's living quarters, where he was sexually abused.

"At other times, Defendant Newman's inappropriate behavior and sexual abuse of (the boy) occurred in the presence of other Kanakuk Kamp personnel." The child was in the camp during the summers of 2005-2007. The lawsuit also names Kanakuk Ministries, Kanakuk Kamp, and every other name by which Kanakuk has been called as defendants.

The lawsuit charges that White and Kanakuk Ministries "had every reason to know Newman, a sexual predator, was operating freely in the Kanakuk Kamps and placing young boys at risk for sexual abuse and molestation and the lifelong burdens that childhood sexual abuse creates."

The petition goes into specifics about White's prior knowledge of Newman's perversions:

"At least as early as 1999, Defendant Joe T. White, Kanakuk Ministries and/or Kanakuk Heritage, Inc. knew that Newman, in the nude, was riding four-wheelers at the 'kamp' with nude 'kampers,' who were minor children entrusted to the care of Defendants. In response to this sexually inappropriate behavior, Newman was placed on probation."

That was not the last time Newman's perverted antics were known to White and Kanakuk officials, the lawsuit charges. "In or about 2003, a nude Defendant Newman was streaking through the 'kamp' property with nude minor 'kampers.' Although this conduct came to the attention of Defendants Joe T. White, Kanakuk Ministries, and/or Kanakuk, Heritage, Inc., again Newman remained on staff in easy reach of his future victims, including John Doe I."

The petition charges White and Kanakuk officials with negligence in allowing Newman anywhere near children. John Doe I "suffered injuries that have required and will continue to require medical and psychological care. The childhood sexual abuse of John Doe I in the context of what was purported to be Christian ministry further complicates his injuries and treatment.

White and Kanakuk are also charged with fraud, misrepresentation, and unfair and deceptive practices, negligent infliction of emotional distress. The parents are asking for medical expenses, punitive damages, and attorneys' fees and are requesting a jury trial.

The first lawsuit, filed Jan. 31 in Taney County Circuit Court, charges officials at the Christian sports camp Kanakuk with fraud for allowing Pete Newman to masquerade as a role model at the same time he was molesting scores of underage boys. The petition was filed on behalf of a Little Rock man who was only 12 years old when Newman allegedly began grooming him.

Among the allegations in that petition:

-Kanakuk officials had received sexual misconduct reports about Pete Newman as early as 1999. (He remained in Kanakuk's employ until 2009.)

-Newman had sexual relations with boys in Missouri, Arkansas, Oklahoma, and Tennessee. (Not mentioned was Colorado where Newman, who is currently serving two life sentences plus 30 years in a Missouri penitentiary, still faces charges.)

The petition indicates the plaintiff suffers from "severe depression and ongoing anxiety and that he is "psychologically confused and spiritually damaged by a person promoted to him by Kanakuk as a role model."

The plaintiff in the Missouri case is asking for a jury trial.
Posted by Randy at 6:35 PM

There has been much speculation and assumption that the victim and his family were exaggerating the circumstances that led to their filing the request for the injunction.

However with the ruling that just took place, it is safe to state that Joe White and Kanakuk's actions and responses to this entire situation has been wrong.

Joe and Kanakuk downplayed Pete and the warning signs and look what the end result was. Even though the victim and their attorneys repeatedly asked them to stop the phone calls, emails and lastly gifts ( not just advertising mailings), they DID NOT. they ignored the requests and did not take the victim and his family serious. They did not care if this was harmful to the boy or not. All they cared about was trying to manipulate the situation, as always.

This is a case of true narcissism. What is sad is that it took a request to the federal courts for Joe and his crew to take this entire situation seriously.

If Joe really cared about this victim he would of left them alone a long time ago.

Senior Federal Court Judges do not grant injunctions without merit. In fact, securing an injunction in the Federal Court System has to involve some very serious circumstances.

It has been interesting to watch this case unfold and cant imagine what is to come.

Pray that that boy is doing ok. Hang in their kid. You have a lot of people praying for you

@5:55, Well stated. Joe and Kanakuk may need to be put out of business; replaced, hopefully, by people eitha new organization and the ability of preventing these things from ever happening again.

How sick and weird is Joe White to bother this kid and his family? OMG

i agree with all the above.

Joe White has been blinded by greed and an over inflated opinion of himself. We have watched these character flaws balloon over the years.

you all need to shut up about Joe white and Kanakuk. Joe White is a role model to so many people around the world, including me. You all would be lucky if you were even a forth of the the person that Joe is. He has changed tens of thousands of lives and brought them to Christ over the course of his life. I have been going to Kanakuk since i was 7, and every year it is the one thing i look forward to.

Yes i knew Pete. i knew him pretty well actually. no i didn't know that all of this stuff was happening. you look at his crime as though you are perfect. this is one mistake one crime. look at all of the lives he did save during his time at Kamp. one of those lives is mine. God used Pete to lead me to Christ and i am grateful for that.

So as you continue on slamming Joe, Pete, and Kanakuk just remember this... Why are you worrying about the splinter in their eyes when you have a log in your own.

Conner Carr, if you call the horrific damage Newman and the "Kamp" have caused and allowed to happen to perhaps thousands of kids a "splinter", then I suggest you might benefit from some introspection on your own values. These men,Joe White included, should be removed from public life. I am just finding out about this after years of urging from devout "Christian" family members that my kids needed to have the Kanakuk experience. Now, with additional concerns coming to light, I have to wonder if this abuse isn't part of a wider network using the "Christian" label as cover. I state this as a believing follower of Christ; one who is now very concerned about the wolves in sheepskin among us.

In the Trump era such behavior is common. Is it surprising that sexual violence occurs in a country whose president is a vile sex offender?

"In the Trump era..."? Did you read this story? The years were well before Trump was President.

The evangelical money machine has their rock stars and Joe White is one of them. The Kamp is a money machine that will soon be out of business as these things come to light...finally. I am thankful that we did not have the money to send our kids to "christian" camps.