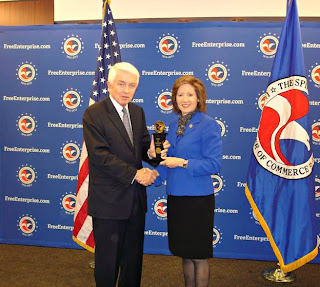 The budget for the 2013 fiscal year was a major issue this week as the U.S. House passed a spending plan to address America’s $15.5 trillion-plus national debt. Our responsible spending plan reduces the national debt and cuts government spending to protect America’s taxpayers while promoting policies to grow our economy. Our budget cuts more than $5 trillion in spending from the President’s budget over the next ten years and makes our tax structure fairer, flatter, and more competitive. It reduces debt as a share of the economy and puts the nation on a path to paying off our huge national debt. With real unemployment topping 15 percent we must focus on policies that encourage significant economic growth. We do that by promoting energy independence, repealing the President’s costly health care takeover, and keeping taxes low for all taxpayers.

Elsewhere, a good deal of attention this past week was focused on the U.S. Supreme Court as it held three days of hearings on the constitutionality of the Obama health care law, with a ruling expected in June or July. I have been a staunch opponent of this intrusion into the lives of Americans and pray the Supreme Court will strike down this law.

With the Supreme Court engaged in its historic review of the controversial health care law, I joined nine other House Republican women for a press conference highlighting the negative impact of the law on American women. http://www.youtube.com/watch?v=Xjvrz3h5TcU

I am going to continue to focus on the issues that really matter to women – creating jobs, unleashing the economy, reducing the national debt, repealing the health care law, promoting energy independence to lower gas prices, and ensuring our children have a prosperous and secure future.

On another matter, I met with Defense Secretary Leon Panetta this week to discuss a possible new round of Base Realignment and Closure (BRAC) and to make him aware of my concerns regarding further cuts to military facilities across the country. The 2005 BRAC cost $39 billion and won’t break even in cost savings until 2018. With our nation’s limited defense dollars and emerging serious threats around the world, I told him now is not the time to subject our communities and our country to a lengthy BRAC process. I am pleased that he was receptive to what I had to say and will continue the discussion on how best to preserve a strong national defense.

As a closing note, I am pleased to tell you I was honored this week by the U.S. Chamber of Commerce which presented me with its Spirit of Enterprise Award in recognition of my pro-business stand during the current session of Congress. I am committed to championing ideas that promote economic growth and job creation for the good of Missouri’s Fourth District and the good of our country.

(Photo: Vicky Hartzler receives the Spirit of Enterprise Award from the U. S. Chamber of Commerce.)
Posted by Randy at 9:26 PM

So Hartzler says "I have been a staunch opponent of this intrusion into the lives of Americans and pray the Supreme Court will strike down this law."

Does she really think god or Jesus would want people to go bankrupt because of medical emergencies. I do nit think so.