Saying goodbye to the forgotten school 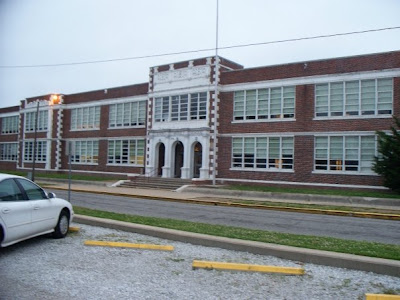 At the end of October, I made my final stop at the old South Middle School, the place where I spent the most enjoyable six years of my teaching career. It was difficult to see a shattered shell of what had once been a vibrant center for learning.

Now, even the shell is gone and I had to stop by and see it for myself. The only thing that remains of the South Middle School I knew are the steps that I walked on everyday to get into the building and the signs around the parking lot.

The school, the marquee, the other evidence that once thousands of students made the transition from elementary to middle to high school at that spot, is all gone, thanks to the May 22 tornado and the necessary removal of the damaged building.

The accompanying photos show South as I remember it, plus the way it is today. Below I am reprinting the post I wrote Nov. 1 after my return visit to South following the tornado: 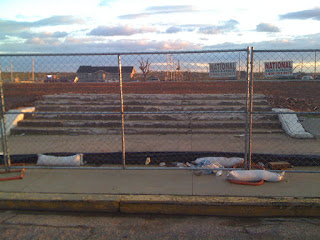 During a recent teacher in-service day, staff members from Joplin East Middle School where I teach, left the warehouse where we are conducting classes for the 2011-2012 school year (and probably the next year or two) and returned to the building that we called our own for the last two years for a farewell ceremony.
I stayed at the warehouse.
It was not that I was making light of the planned ceremony. I am sure it helped some to find closure after the May 22 tornado that destroyed that building; I just did not have a strong connection. It was a brand new building, less than two years old, and while I had some wonderful memories in those two school years, I did not feel a need to say goodbye.
The building where I used to teach was an entirely different matter. Before moving into East Middle School, I taught at South for six years. It was an old building, one of those made in the 1920s that did not have a smooth transition into the computer era.
South did not have a gymnasium; it had an auditorium with an extended stage that was used for physical education classes. The computer lab was a converted boys bathroom. The classrooms, at approximately 500 square feet, were smaller than the ones in the warehouse and desks were jammed into every corner with a cruel efficiency.
An entire area of the basement was shut off due to asbestos. We had no playground area, just a fenced-in gravel lot with basketball goals and picnic tables that had been donated to us by our hard working parent-teacher organization.
By all definition, South Middle School was a dump compared to the spacious, modern school building we left it for prior to the 2009-2010 school year.
I loved that broken down building like no place I have worked in the past three and a half decades.
During the first year at the new East, I had to go to South during the school day on one occasion and it was not the same. The halls seemed darker, the laughter nearly non-existent. This was not my South. I made the mistake of stopping by Room 210, which had been home to me for six years. There were no traces of that home. It was just another classroom.
After serving as a temporary building for one of our other middle schools that year, the old South building was vacant last year for the first time in more than 80 years.
I did not even think about it until May 22. The same tornado that destroyed our state-of-the-art East Middle School, also ripped through the stately building with the grim, institutional look on 22nd Street.
I checked out East two days after the tornado. It took me more than five months to visit South. After I read that our board of education had awarded a contract to demolish South, I had to make one more pilgrimage to the place that had been such an important part of my life.
It was broad daylight Sunday when I parked my car in the gravel lot in the same parking place I used every morning at 6:45 a.m. during the school year.
As far as I could tell, I was the only one in a two block area. The houses in this older part of town, the ones that survived the tornado, are mostly boarded up with prominent no-trespassing signs.
As 40-mile per hour winds whipped through my old school, despite the daylight, there was a sense that I was walking in another world.
Most of South's windows are gone, but the wind whipped through the blinds, all of which were intact, slamming them against the wall in a macabre symphony. Creaking metal sounds could be heard, every 10 seconds or so.
Sections of the building were gone and the front door, the one I had walked through thousands of times during those six years was covered by a sign warning of asbestos contamination.
I looked up at the second floor to the window of my room 210 and the ghosts of thousands of wonderful memories came back to me.
There was Jessica in her front row seat, working diligently on her Elks Lodge essay, filling in even the margins on her paper and then turning in 750 words for an essay that did not allow more than 250. After that, Jessica did a masterful editing job, eliminating 501 words and winning the contest.
There was Andrew causing people to roll in the aisles with laughter with his interpretation of a character during our reading of the play, The Diary of Anne Frank.
I could see Fox's always empty seat, and then when I looked down at the floor, I saw her scribbling away in her notebook.
After thinking about those days for several, long minutes, I walked back to my car and left South Middle School for the final time.
I appreciate the public ceremony for East. I am sure it helped my fellow staff members deal with the loss of their workplace.
But to me, South Middle School was a home and a quiet, private goodbye was just what I needed. 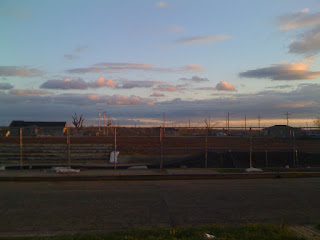